My 2018 macbook pro with i9 processor running Catalina version 10.15.6 seems to randomly throttle the CPU frequency even with low CPU utilization and lowish temperatures: 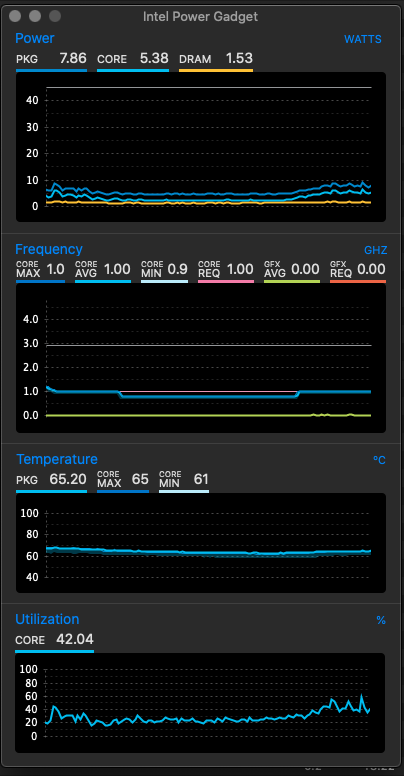 I am using a docking station to connect to two external monitors and received hard wired ethernet. Additionally, I'm suppling power via the default usb c apple charger. I read in some places that this throttling could maybe with a bad power source, so I connected the default charger.

Any insight here? I updated to Catalina recently, but the problem existed before the update and has happened after as well. Does it have to do with my docking station? Hardware problem? The frequency throttling seems to happen even after I unplug the docking station, but I never really use my computer enough without the docker station to notice if it happens during normal use.

In my opinion you are not seeing CPU throttling, but one of Intel's power saving features known as Dynamic Frequency Scaling or more specifically Intel SpeedStep. While idle, the CPU can dynamically reduce clock speed to reduce power consumption.

In case you still think you are experiencing CPU throttling, I suggest you update your question with the output from pmset -g thermlog as described in the accepted answer or update your screenshot with one from the latest Intel Power Gadget where the REQ parameter gives you an indication of throttling.

You're unfortunately dealing with a long standing problem Apple has had with trying to jam a Core i9 CPU into a form factor that is inherently and notoriously bad with respect to thermal design.

Here's just a short list of articles addressing this issue.

Apple claims to have issued a software patch. It wouldn't be out of the ordinary for Apple to break things again with a macOS update. How many times has an update broken something like WiFi only to be fixed in the subsequent release?

Even with a software patch, you can't get around physics. IMO, there's an unreasonable expectation when it comes to MacBook Pro computers: users want them to be razor thin, completely silent, and über powerful. Unfortunately, physics has a bad habit of crashing the party.

If you want all the power of a high end CPU and GPU then you have to deal with the heat it generates. Dealing with heat means cooling - proper heat sinks and fans. That alone has a balance you must strike - if you want proper cooling but have something be very quiet, you need larger heat sinks. If you want something razor thin, thereby limiting the size of the heat sink, you need a fan which inherently makes noise. So, if the market is demanding a razor thin, silent laptop with an i9 processor and GPU, then the trade off will be thermal throttling.

So, to answer your question, it's a design problem with that form factor and it's not limited to your MacBook Pro - other manufacturers are dealing with this issue.

From a personal perspective, I wouldn't get a MacBook with an i7 or i9 processor because it just doesn't have the size heat sink required to efficiently dissapate heat. The fans are also to anemic to efficiently cool things down. This means it has to throttle to limit heat which means you're not getting the CPU you paid for. To put it another way, I would rather have an i5 that can run at 100% with no throttling than an i7 or i9 that can only run at 50-75% because of throttling.

Not the answer you're looking for? Browse other questions tagged macos macbook-pro performance cpu temperature .

43
How to monitor and control thermal CPU throttling in OS X?
29
How to disable the SpeedStep when using MacBook Pro without a battery?
1
Severe GPU throttling freezes 2019 MBP16 after 30 minutes of Civilization VI