I have a 2014 Mac mini with an Intel Core i5 processor. I noticed that no matter how much I used it, the fans barely ramped up. Using iStat Menus I noticed that it would usually stay around its base speed of 1800 rpm (0% of the fan speed range), and go up to 2000 (7%) rpm under heavy load. It would never reach the maximum of 4845 rpm (100%) unless I manually set it using iStat Menus.

To stress test the CPU I tried running 16 instances of yes > /dev/null &, play an 8K video on YouTube, and compress a video on Handbrake. Definitely more than necessary but my fans still didn't ramp up after a few hours of testing. This is what my stats looked like during the hour that I checked in with it: 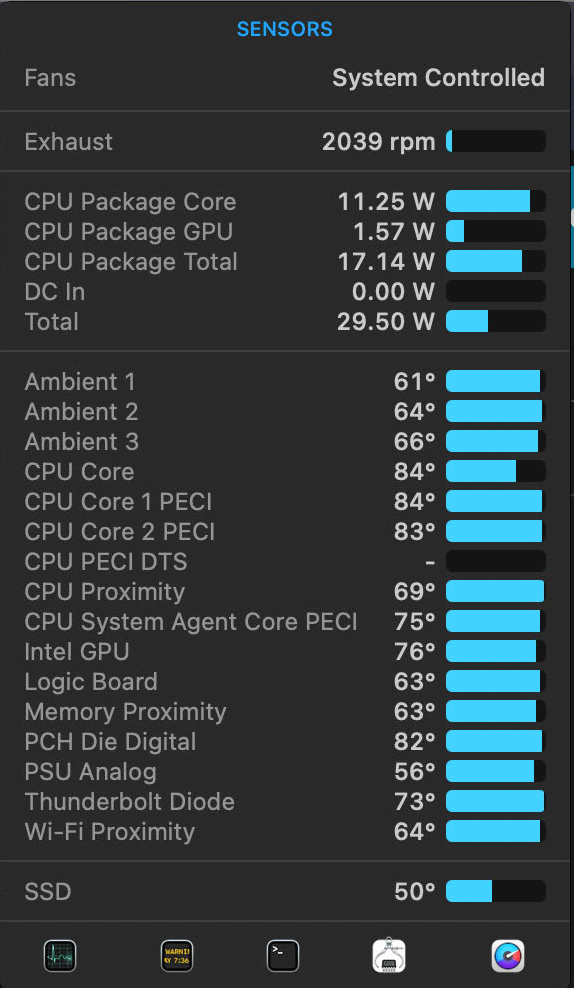 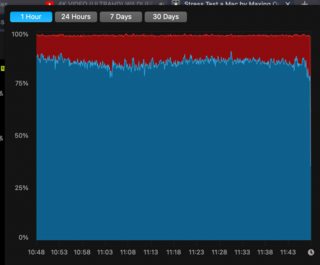 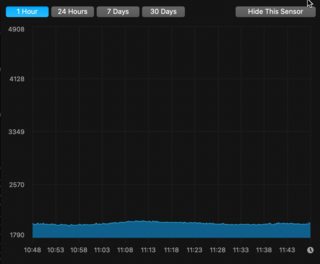 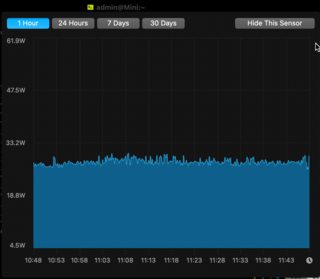 What's quite surprising is the thermal limit, it seems like it doesn't want to go past 85°C whereas every other Apple CPU I've seen gets close to the max junction temperature (usually 105°C) before the fans start kicking in to keep it from throttling.

... but my fans still didn't ramp up after a few hours of testing.

Personally, I've felt that the default Apple settings for heat management, while really ideal for the majority use cases on Mac, aren't the most optimal when you really want full CPU performance. One of the things Apple's marketing likes to highlight is that the mac is "quiet" and you can "barely" hear the CPU fan. So to meet this design need of "quiet and thus less distracting" computers, I feel they do resort to more CPU throttling than necessary, and a slower ramp of the fan speed to reduce the fan noise, at the slight expense of CPU performance. (This is more true for the Apple laptops than their desktop counterpart though, unless you have made custom modifications to your desktop Mac).

(Note: Be careful in messing with the default fan speeds and / or CPU voltage settings to overclock the CPUs. It can reduce the life of the CPU fan and the CPU and in worst cases even damage it. And Apple parts and repair costs are very high.)

Even I find it hard to believe that your CPU doesn't cross 85 degrees with what you described. Though, I do have a doubt if you are stressing your CPU enough. The Youtube video maybe being decoded by the hardware decoder in the CPU. If you use a hardware encoder (VideoToolbox) on Handbrake the encoding will be done by the hardware encoder on the CPU, and not by the CPU cores.

One way to really use all the CPU cores fully, for a while, would be to encode a movie using x265 / HEVC encoding. HEVC encoding is very CPU intensive and is a good way to stress your CPU.

If that doesn't happen, it's a good guess that some CPU throttling is happening.

The Intel Power Gadgets app is very useful for more accurate monitoring of the CPU while stress testing it.

To run the tests:

What the OP has effectively demonstrated is that Apple's extensive efforts and expenditure towards building out a thermal management solution that covers the entire performance envelope have been successful. The Mac is behaving precisely as it was designed to: By applying the least amount of active cooling necessary to maintain safe operating temperatures at any given load. There are multiple whole teams at Apple whose entire job description is to make this a reality.

As others have said in the comments, you may not even be able to induce a sufficiently high load to exceed your Mac's active cooling capacity and force throttling in your current environmental conditions. In order to test that your machine will, indeed, spool up to a 100% fan duty cycle, you will need to place your device in a container with as little ambient airflow as possible and let your load run a while. At some point you will notice the fans at max and the die temps rising and the throttling kicking in, eventually followed by an emergency thermal shutdown.

Not the answer you're looking for? Browse other questions tagged mac-mini performance cpu temperature .

61
How to monitor and control thermal CPU throttling in OS X?

3
Fan Speed and Temperature on MBP Retina 13 2013
0
6000 RPM at 65C
1
MacBook Pro Fan Always Onish
6
Is this a normal fan speed and CPU temperature for an idle MacBook Pro (Retina, 15-inch, Mid 2015)
2
High Temp at Startup after Upgrading to High Sierra
2
MacBook Pro integrated GPU drawing too much power when CPU monitoring app is running
0
iMac 2019 fans rather loud (and at 2850rpm) when only 30% CPU - is this normal?
1
iMac mid 2011 T2 secondary heatsink heating up