My brand new 2019 Macbook Pro 16" (macOS v10.15.7) suffers from severe GPU throttling after 30 minutes of playing Civilization 6. The freeze causes visual GPU artifacts that extend beyond the game's window while consuming 1100% CPU. In Windowed Mode it is sometimes possible to force-quit Civ6 and recover system stability. I've read online that these thermal issues do not occur with top-line AMD Radeon 5600M GPU. 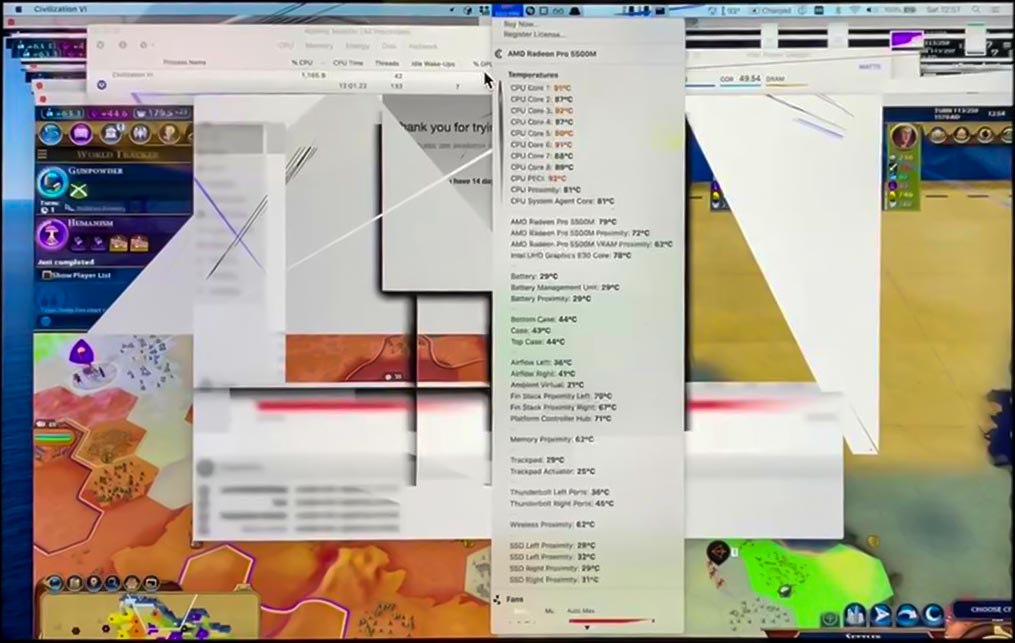 Is there any known software fix that can prevent this catastrophic breakdown, perhaps by limiting the GPU clock's speeds?

Personally, I invested in this machine as a musician and a professional programmer to do live music and video performances, so if the GPU freezes in the middle of a concert, that will be unacceptable. Machine details:

Suspected causes in order of likelihood:

In the meantime, I am in a battle with Apple to replace my £3200 Macbook Semi-Pro.

Here is a related question, but mine should not be considered a duplicate.

I wrote a answer to a similar question; it comes down to the design of the MacBook in relation to the thermal requirements of the CPU and GPU.

I don't believe it's faulty drivers - could they be more efficient? Sure, what couldn't? I also don't believe that you have a faulty GPU, however, the way to confirm that is to benchmark the GPU. Essentially stress test it to see if it fails.

Could it be a bug in Civ6? That's likely as well.

As for the reliability of the machine to do the job, I believe you'll be fine for what you bought it for - programming and music. These machines are very popular for both of those tasks and personal experience with using a Mac in audio recording/production found that even lower end Macs with ample memory and no GPU were up to the task.

I find that MacBook computers (and most laptops for that matter) aren't the appropriate platform for games. There's a reason most of the gaming rigs you see are desktop builds with ridiculous cooling mechanisms at the forefront. In fact, I've seen a 2012 iMac (which is essentially a MacBook Pro in a desktop config) outperform a 2015 MacBook pro with essentially the same specs. The iMac was able to run it's CPU at a higher speed for longer because it remained cooler longer.

Bottom line: You should be safe with your Mac for work purposes and if you want to game, I'd build a gaming rig. Besides, it's just pragmatic to keep your recreation off of the device that pays the bills, but that's just my philosophy so YMMV.

Everyone needs to submit a bug report according to this link.

Not the answer you're looking for? Browse other questions tagged macbook-pro hang gpu temperature .