I know my battery should be replaced, but is that all of the problem? (Update)

Updated:
I am using a MacBookPro8,1 with a non-replaceable battery. Recently that battery charging status was saying,Replace soon. But it was working fine and kept enough charge for my daily works. So I didn't need to take the charger at work. But when I shut down the laptop for few minutes, then I cannot turn it on without the charger plugged in.
The battery status is now Replace Now. when I press Battery indicator button at side of the laptop case, all LEDs start blinking at same time (5 times).
The MagSafe LED is also green.
Also Mac OSX shows that 98% of the battery is charged.
But when the laptop is off, pressing the Battery indicator button doesn't turn on any LEDs (Normally it should turn on all LEDs as it is charged 98%)
Also, more importantly when I plug out the charger the computer turns off instantly. Not even with a second delay.
On the other side, when I turn on the laptop the time goes back to 2001.
I tried to rest SMC by holding Shift+crtl+option+power and then releasing them at same time while the computer was off. Then I pressed the turn off/on button.

I had another problem with my MacBook's charging issue few months ago. But I solved it with replacing the charger's capacitors. But I think in this case the problem is with the battery

I know my battery should be replaced, but is that all of the problem? Or Does it have other issues?

Did I correctly reset SMC with that approach?

Is there anything I can do to use this battery a bit longer and postpone buying a new one?

Thanks for your reply.

Here are the status images: 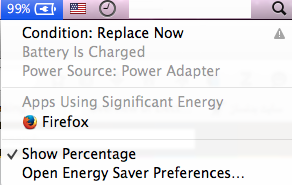 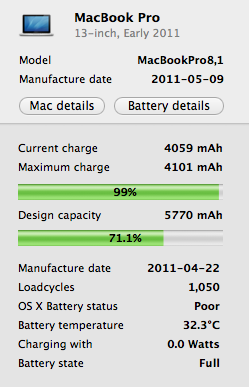 You can leave your battery unchanged as long as you want, even it is not recommended by the operating system (i.e. Apple).

From my own experience (2011 MacBook Air with 1178 load cycles), the battery performance will just degrade more.

It may be be months away, but at one point the battery will be so weak that an unplugged Mac will not go to sleep when the battery is empty, but just shut down. Trust me, you will notice.

An Apple Store employee told me that battery replacements can often be done while you wait, or within a few hours if you make a Genius Bar appointment rather early in the morning.

Not the answer you're looking for? Browse other questions tagged macbook-pro hardware battery charging repair .

2
Battery is not charging despite SMC reset
0
How to get MacBook Pro(early 2011,13 inches) logic board schematic?

0
Does a battery's remaining power drop consistently regardless of remaining charge?
0
2011 13" Macbook Pro shows a green charging light but battery was draining and now it won't respond to SMC Reset
1
Debugging charging problem with MacBook Pro
0
Macbook Pro 8,1 not charging