Macbook will say it's charging, but it's not

Sometimes even if the AC charger indicates it's charging (orange light), but the OS will say it is discharging. coconutBattery agrees.

Sometimes the battery will indicate it's charging, but when I remove the AC power it turns out it was not; the battery charge level will drop. If this goes on long enough the laptop will power off because the battery has gone dead but the OS thought it was at 100%. In this case, the lights on the battery agree it is out of power.

coconutBattery says the battery is in good condition, has 93% of its capacity, has only gone through 317 cycles, and is not overheating (30ºC).

My question is, is replacing the battery likely to fix this problem? Or is this indicative of a more serious problem?

Things I have tried:

I finally fixed it today. It turns out the Magsafe DC-in board can be replaced. It's a little $25 part ($15 refurbished). I followed the instructions on iFixit.com; you have to take apart practically the whole laptop which includes a lot of tiny, tiny connectors, but it's doable with just a few screwdrivers and a spudger I made from a chopstick. 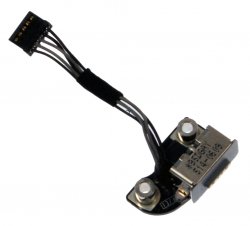 The battery now charges fine, and the laptop doesn't get nearly as hot (that could also be because I cleaned the heat sink).

Not the answer you're looking for? Browse other questions tagged macbook-pro battery charging .