Is there a keyboard shortcut to close the Character Viewer popup window?

I have some unicode characters that I like to use. In most programs there is a keyboard shortcut Command+Control+Space to show this window. But then if hit Command-W, I will close the app's main window or tab, not this floating popup. To close the popup, I have to hunt for the little close button in the top left. It annoys me. Is there another keyboard shortcut that can close that window, or any floating window like that? 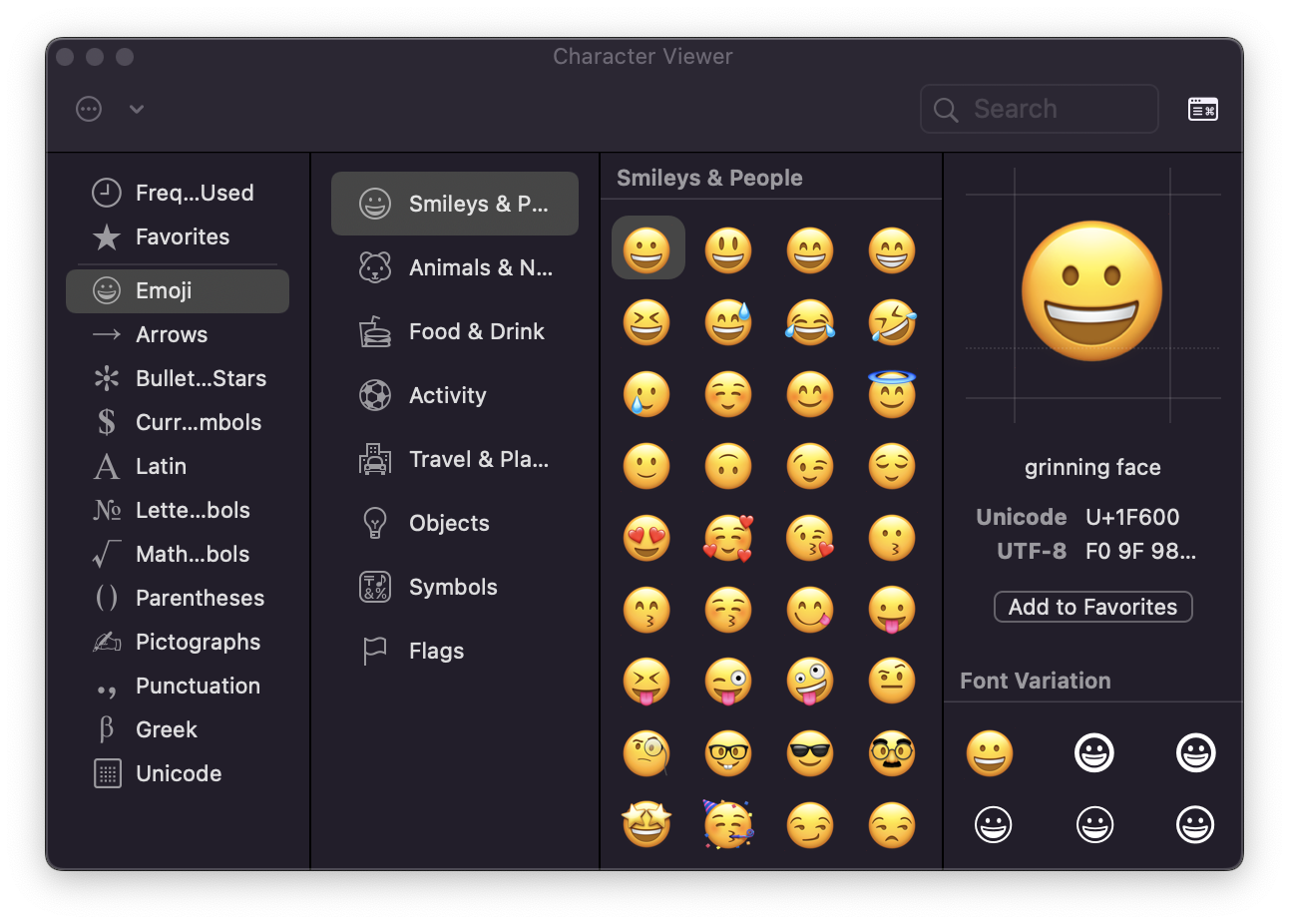 That is a good point (you can make at apple.com/feedback).

I tried several things and what I noticed is that it matters if the Character Viewer window is active. In your example pic, you can tell it is not active because the window management buttons are grey instead of red, grey, and green (the middle, normally yellow, button is not available because there is no full screen mode for dialogs).

Here's the rub: sometimes I could not make the dialog active in the Notes app but I could consistently with Safari. 🤨. In either case, selecting a character to insert did not make the window active. When I could make it active, it required two clicks (either a double click; or click, pause, click) on the title or tool bar. Then, ⌘W worked. However, I could have just clicked once on the close button and be done with it.

If you decide to submit this feedback to Apple, as I will do, I suggest to you that you suggest to them: Make the Character Viewer dialog a full-fledged app:

OR, make the dialog a pane instead so that with a keystroke or click it pulls down from the window frame and goes away when a character is inserted.

OR, whatever genius idea you have. Really, we just want someone at Apple to review the viewer and fix the UIX issues.

I use several characters often (⌘, ⌥, ⇥, ⇧, ↵, etc.), so I created keyboard replacements for them. If you have a few you use frequently, avoid the Character Viewer entirely:

Choose whatever is easy for you to use for the leading character, but I recommend sticking with alternative characters you get with the ⌥ modifier key, especially ones easy to type and not something you use regularly. Keep it consistent. Don't be afraid to use more than a couple of defining characters. For example, ¡ plus com (⌘), opt (⌥), tab (⇥), shift (⇧), or return (↵) makes them easy to remember and type.

Thank you for posting your question. I did just tolerate the quirkiness of this dialog but you prompted me to provide my own feedback.

Is there a keyboard shortcut to close the Character Viewer popup window?

Technically yes, it's ⌘W, however, the window has to be active in that its buttons on the upper-left of the window are showing as red, yellow, green, which of course it isn't normally.

The workaround that I use is an AppleScript script that is triggered by a keyboard shortcut assigned to it in an application named FastScripts. I use: ⌃⌘␣     (shift+command+space)

The script requires that the [√] Show Input menu in menu bar is checked in System Preferences > Keyboard > Input Sources.

The assigned keyboard shortcut both shows and hides the Character Viewer.

In Script Editor, copy and paste the example AppleScript code into a new document and save it as e.g. Toggle Character Viewer in ~/Library/Scripts/.

The example AppleScript code, shown above, was tested in Script Editor and triggered by FastScripts under macOS Catalina and with Language & Region settings in System Preferences set to English (US) — Primary and worked for me without issue1.

In the example AppleScript code, menu 1 in click menu item 1 of menu 1 of ¬ is either Show Emoji & Symbols or Hide Emoji & Symbols on the actual menu, depending on the state of the Character Viewer window. If one also has Input Sources showing on the Input menu then adjust the number of the menu item accordingly and note that menu separators count in the number count.

The example AppleScript code can be used in other applications that have similar capability to run a script and assign a keyboard shortcut. Hammerspoon is another application that I use for similar things.

While I do not use Keyboard Maestro or Karabiner-Elements, I believe they too can run a script with an assigned keyboard shortcut.

FastScripts can be used to configure up to 10 script shortcuts for free. To enable unlimited script shortcuts, purchase a license and enter your license info in the Registration pane.

I am not affiliated with the developer of FastScripts or Hammerspoon, just a satisfied user of the products.

If you click the button to the right of the search box, the window becomes a popup that you can dismiss by hitting Esc.

Yes, this is absolutely doable.

There's an option to "Press the fn key to:" and then a drop down which defaults to "Do Nothing".

Change that drop down to "Show Emoji & Symbols". After that, tapping fn toggles the character viewer. Tap once to bring up the viewer, tap again to dismiss it. Works for the compact or full window.

This doesn't interfere with pressing and holding fn to invoke F1, F2, etc.

Newer Magic Keyboards have aglobe 🌐/fn key on them which defaults to doing the same thing.

If you hit CtrlCmdSpace to bring up the viewer, tapping fn (with the proper setting) will dismiss it.

FWIW, I hooked up a Keychron mechanical keyboard to a 2015 MacBook Pro running Monterey and tapping fn2 on that thing worked as well.

Not the answer you're looking for? Browse other questions tagged shortcut keybindings unicode .

4
How to search for a character in the special characters window?
11
How do I alt+f4 in OS X? I want to close focused window
4
On a mac, how can I force-close a window of an app (NOT the app itself)?
1
keyboard shortcut to rename the title of terminal?
2
How to close the emoji palette using the keyboard shortcut?
2
Set keyboard shortcuts to move to the next space to wrap around?
1
Shortcut to switch windows, bringing the newly active window to the top
4
It's impossible to focus on these windows with keyboard shortcuts
2
Is there a shortcut for selecting the desktop?
3
How do I type a Unicode special space characters without installing the Unicode Hex Input Keyboard?