Mojave: Is there a way to stop or delay the sorting of items in the finder using list or column view?

I have a particular older system I use for cataloging items.

I get a folder of 50+ items, then have to manually rename each item. Batch renaming isn't useful and would actually be more work because there's little to no commonality between the files. I do have, run, and love A Better Finder Rename, but even that isn't useful for this process 90% of the time.

In Yosemite's Finder (column view), I could rename a file then hit Return and quickly hit the ↓ or → key to move to the next file. Hit Return, rename and quickly hit ↓ or →... repeat. This had a benefit of keeping the active file focused in the relevant list of items where I needed to be. If I paused for a few seconds before hitting return in the next file, then the list would re-sort. But I had roughly 5 seconds to enter renaming mode on the next file before re-sorting occurred.

In Yosemite, after about 20-30 files I'd have to relaunch the Finder due to some cache that started getting bogged down. Renaming and cursor movements would start getting delayed - the more I files I renamed the longer the delay would become. Relaunch Finder.. all back to 100% speed. I learned to live with this.

I recently upgraded this system to Mojave, as far as it can go. In Mojave's Finder (column or list view), as soon as I rename a file and hit Return the file instantly moves to re-sort based upon its new name. No matter how fast I hit the arrow keys, the file moves. I've searched and searched for a way to delay or turn off this "instant resort" behavior and I've come up with nothing. I've turned off (reduced) animations, etc and there's been no change.

Is there a way in Mojave's Finder to manually rename a list of files without the files instantly moving to re-sort based upon their new name? Some sort of "delayed re-sort"?

I can't use icon view, it's too cumbersome. And the insta-move behavior seems to happen in column and list view equally. I've tried grouping by various things, but since the files are all the same "type/kind" and created at relatively the same date, and the name is changing, the file still always move to some degree.

After some discussion…
If you use List view rather than Column, then you can add extra columns allowing you to sort by various non-standard parameters, which could result in your chosen sort not changing with a simple file rename.

I tend to use date modified for my photos - a name change does not qualify as a 'modification' so things will stay where they are after a rename. 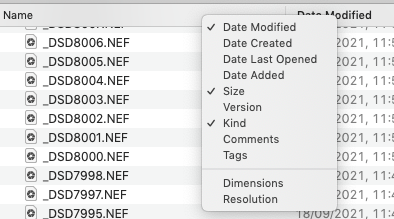 Not the answer you're looking for? Browse other questions tagged finder mojave rename animation .

4
Is there a way to display more metadata fields in the Finder list view?
4
Why won't the Finder sort when clicking on the column headers in this different list view?
4
Finder list view, change column with to optimal with using AppleScript
3
Stop finder using cover flow in icon view
9
On Mavericks, in the Finder in List view, column widths keep changing
4
How can I change Finder's "Name" column width in "List" view in El Capitan?
6
Is it possible to change a Finder List View column width in AppleScript?
2
Is there a way of preventing other Finder windows from responding to unnecessary drag/drop events?
1
How do I set the finder view to only list files and folder by name and not group by date modified?
1
Change Finder sort from descending to ascending in anything but list view?