Replacement Battery: How to evaluate quality?

I replaced the battery on my MacBook Pro (Retina, 15-inch, Mid 2014), after over 2200 cycles, with a new one I bought off aliexpress. I made sure to buy the most expensive version, in order to avoid issues, I paid 75$ for a "NOHON" battery with good reviews.

While I was inside I extradited a ton of dust bunnies, with the result of the macbook now being very quite and seemingly faster. It now probably uses less electricity than before.

I checked coconut battery and it says that the battery is in good condition.

However, it seems to me, that the battery is losing a lot of charge very fast. Only minutes after unplugging with 100% the battery is already at 97%. About two hours cost me almost half the battery.

When I bought this notebook, it would basically go almost the whole day without recharge.

Since I know, that there frequently are issues with these replacement batteries, how can I check if the battery has any? Is there anything more I can do apart from checking the health, which only says "good"?

I didn't bother calibrating the battery, because from what I read, unibody batteries don't need that. I did however charge it fully and leave it plugged in for hours after it was charged. 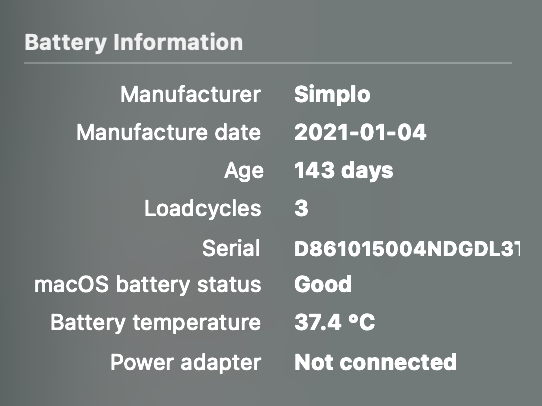 I would run the battery through 3 full cycles and then revisit your data collection. The fact that it works and the firmware on the Mac has accepted the battery and not thrown a “service battery” or fault is a great first step.

Only time will tell if they voltage curve and performance of this battery of cells performs for you.

I would quibble that calibration is needed for all batteries, but that for unibody Macs, that calibration happens as you use the battery over time, not that you have to force it by disconnecting the charger and doing the steps manually. I think it’s still valuable to repeat that old process with any suspect hardware. You won’t know how a system performs in all conditions without exposing it to all conditions. A snapshot of the health when topped off is just a snapshot whether the battery came from Apple’s supply chain and was tested before assembly or DIY like you did quite well from what you report. Great job learning how this all works and asking an excellently documented question.

1
iPhone 4 battery questions
1
I'm in Peru and having battery problems and electric shock issues with my new MacBook Air
4
Is battery life supposed to go not even a year?
0
New MacBook Battery and charging
2
MacBook 13" white (mid 2007) - how to treat a new battery for optimal battery life?
0
Macbook Air - old battery charges, replacement battery does not
1
iPad 2 mini with weird battery issue
1
Battery drains too fast when device is Shut Down
0
MacBook Pro will only charge if using a 3rd party adapter after battery replacement