My MacBook Pro's (13-inch, 2016, Four Thunderbolt 3 Ports) internal microphone identifies as a stereo microphone (in the System Report as well as in Audio MIDI Setup),

However if I record some audio with it to a stereo channel in Logic, I get two completely identical channels. I verified by putting Logic's Gain effect, inverting the phase of one of the channels and summing them to mono, which results in complete silence - 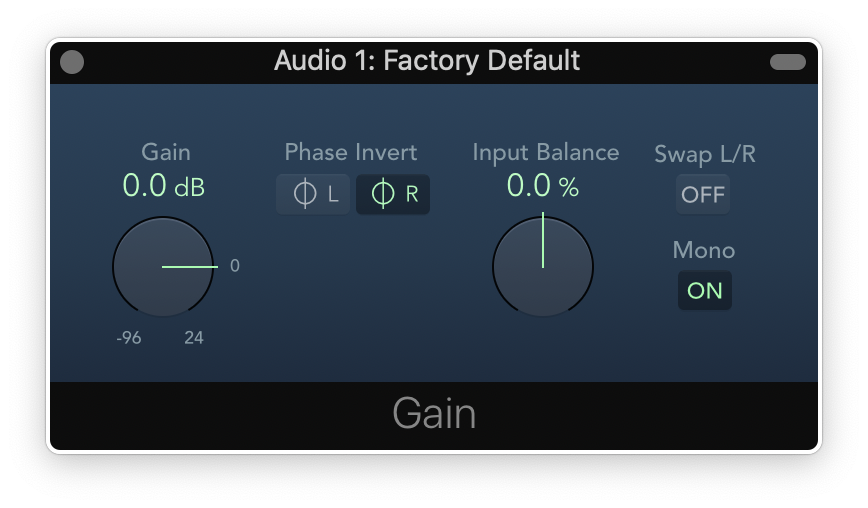 Is the microphone indeed just mono? Why does it work as a fake stereo microphone? Is that so that if I connect a stereo mic to the line-in it will work as the same device?

Looking at the technical specifications of some random MacBook Pro computers, none say that there’s a “stereo microphone”. Instead, they reference “dual microphones” “or a “3 mic array”. Personally, what I have found is that these microphones are not up to the task of anything beyond a quick voice recording, dictation, or the occasional FaceTime/Skype video chat session. Even then, I’ve found it necessary to use a proper external microphone. My feeling is that it’s not really a stereo mic, but mono microphones that are digitally made stereo.

Many years back I was tasked with coming up with a way to record a live presentation as it was streamed from a camera attached to a MacBook. They were using the internal mic to pick up the sounds. The loud speakers were in non-eqiadistant locations to the Mac so I was concerned with the how the sound would come out since one speaker was obviously closer to the Mac than the other. Well, the sound was bad but it wasn’t stereo - both channels were identically bad. What I found that in order to get a proper, quality stereo recording, I needed to utilize a mixer and obtain the audio directly from audio gear as opposed to letting the internal microphone do the work.

Bottom line, I would avoid using the internal mic if you can - it’s more for convenience than quality. Use a USB mic or if using more professional gear, a USB mixer so you can manage and manipulate the sound levels properly.

Not the answer you're looking for? Browse other questions tagged macbook-pro audio microphone .

5
How to connect a 3.5mm microphone (not amplified) to an iMac for recording?

4
How can I use an audio device's other channel for input to iChat and Skype?
2
How can I force Mac OS X to treat my Mackie Onyx Blackjack as a mono input device?
0
Use a USB sound card with multiple input lines in apps like Skype or Dictation?
0
Blocking the internal microphone hole
2
Using external microphone disables internal speaker
0
How can I mix multi-channel input device down to mono?