Following this question, I have obtained and installed macOS Mojave's Apple Color Emoji.ttc on macOS Sierra. While I can now see these emojis if I'm texted them, they don't show up on my emoji keyboard (even when placed in /System/Library/Fonts/)

One of the answers to that question mentioned that this would happen:

Emoji & Symbol picker will not list the newer emoji added since your version of macOS. For that to work you would also need to update at least /System/Library/PrivateFrameworks/CoreEmoji.framework and maybe some other files.

Because of this, I tried switching out macOS Sierra's CoreEmoji.framework for Mojave's. This did not go well to say the least.

As soon as I renamed the original CoreEmoji.framework (to make sure that it still existed), Finder immediately froze, and when force quit didn't re-open, open applications stopped working, and I was unable to launch any apps or files. I was also unable to Log out, Restart, or Shutdown (except when pressing and holding the power button).

After shutting down, when attempting to restart, there was no restart sound, the progress bar didn't display any progress, after about 1 min the screen brightness was lowered a bit (like what happens when you computer is about to go to sleep or start a screensaver), and after 2-3 mins of starting up, the screen turned off completely. The computer didn't respond to any key presses or mouse activity.

I was able to undo the damage done by booting into the Recovery partition and using mv to move the origonal CoreEmoji.framework back into place, and was then able to restart into my regular macOS partition.

So, it turns out that changing something (that I wouldn't think make a big difference) like CoreEmoji.framework can make it so that macOS can't restart, so I was wondering if there is any way, other than by completely replacing CoreEmoji.framework, to get macOS Mojave's emojis to show up in the emoji keyboard. Does something like EmojiAttributes exist for macOS? Or, as ridiculous as this sounds, could EmojiAttributes be modified to work as a mySIMBL extension? The only problem with that solution is that I have no idea how to build with theos, as for some reason it seems that I didn't install it correctly on macOS or iOS (I followed the instructions for both, but it doesn't work).

Also, before you tell me that I did something less than optimally smart, yes, I do have backups of everything, and in the worst-case-scenario, could have reinstalled macOS.

Replacing the entire CoreEmoji.framework bundle DOES NOT WORK and will prevent you from booting successfully (as noted above). The Monterey version of the bundle is missing several files that Mojave seems to depend on, thus the bundles must be "merged", only files that exist in both bundle versions should be replaced.

As noted in the original post, modifying system files while booted is dangerous and probably won't work– boot to recovery mode and use terminal to replace files. 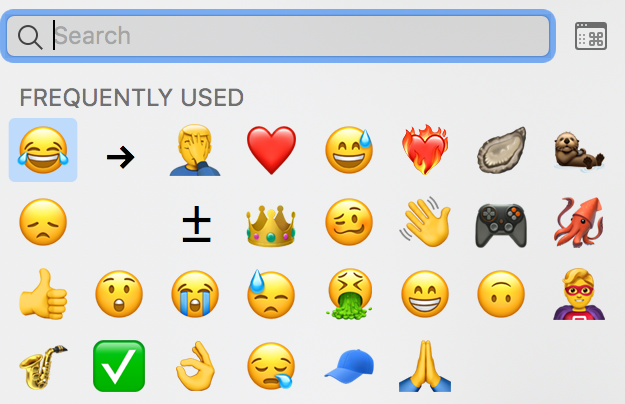 Not the answer you're looking for? Browse other questions tagged keyboard macos ui emoji .

16
Is there a way to update the emoji font?

4
CTRL + CMD + SPACE brings up Characters window instead of Emoji window
0
How can I use Blackberry emojis on my non-jailbroken iOS device?
1
Tried to update to El Capitan, now I can't boot at all
0
macOS: Is there a way to keep the Emoji & Symbol viewer on top/without disappearing?
3
Why can't Safari display this emoji when I am logged in?
2
Keyboard and Emoji Viewer menu vs. Input menu?