Can't restart Mac: Finder not responding or «not open anymore» & other culprits

I have been experiencing several serious-looking problems with my MacBook (OSX Yosemite 10.10.5, model MacBookPro10,1: Mid 2012 Retina, 16GB RAM, 768GB SSD) for a while now, the major of them being unable to restart, shutdown or log out normally. What happens is, after quitting every app, the system is left idling at the empty desktop — no icons, no menu bar, just the wallpaper. The mouse pointer is movable, Dock and Spotlight are still operating, but Finder is «Not Responding» and unable to relaunch in any way. So all I'm left with is a hard Power button reset or sudo shutdown -h now (another workaround is to click Restart with admin rights on the login window, I presume it's the same as the terminal command).

This problem is accompanied (and may or may not be caused) by many others:

All of these get fixed by a Mac restart, but keep steadily accumulating again. It's like the more time elapses after a restart, the more ruined and deteriorated the system becomes.

For a positive note, this whole situation has taught me to do frequent Time Machine backups, but I would like to leave OS reinstallation as a last resort. (My drive is partitioned into two, with Windows 7 installed through Boot Camp, if that has significance.) I know that Yosemite is quite old, but I'm honestly scared of upgrading lest it becomes worse (performance loss, new glitches, feel free to reassure me).

So, could anyone provide tips on what the root of this problem may be and how to fix it? Logs I should check, tests I can do, files to wipe or redact? Any advice is appreciated. Thank you, and safe travels!

Update 1:
I have tried booting into Safe Mode once again, acting out some generic work and having a look at the Activity Monitor. Here is what it looks like: 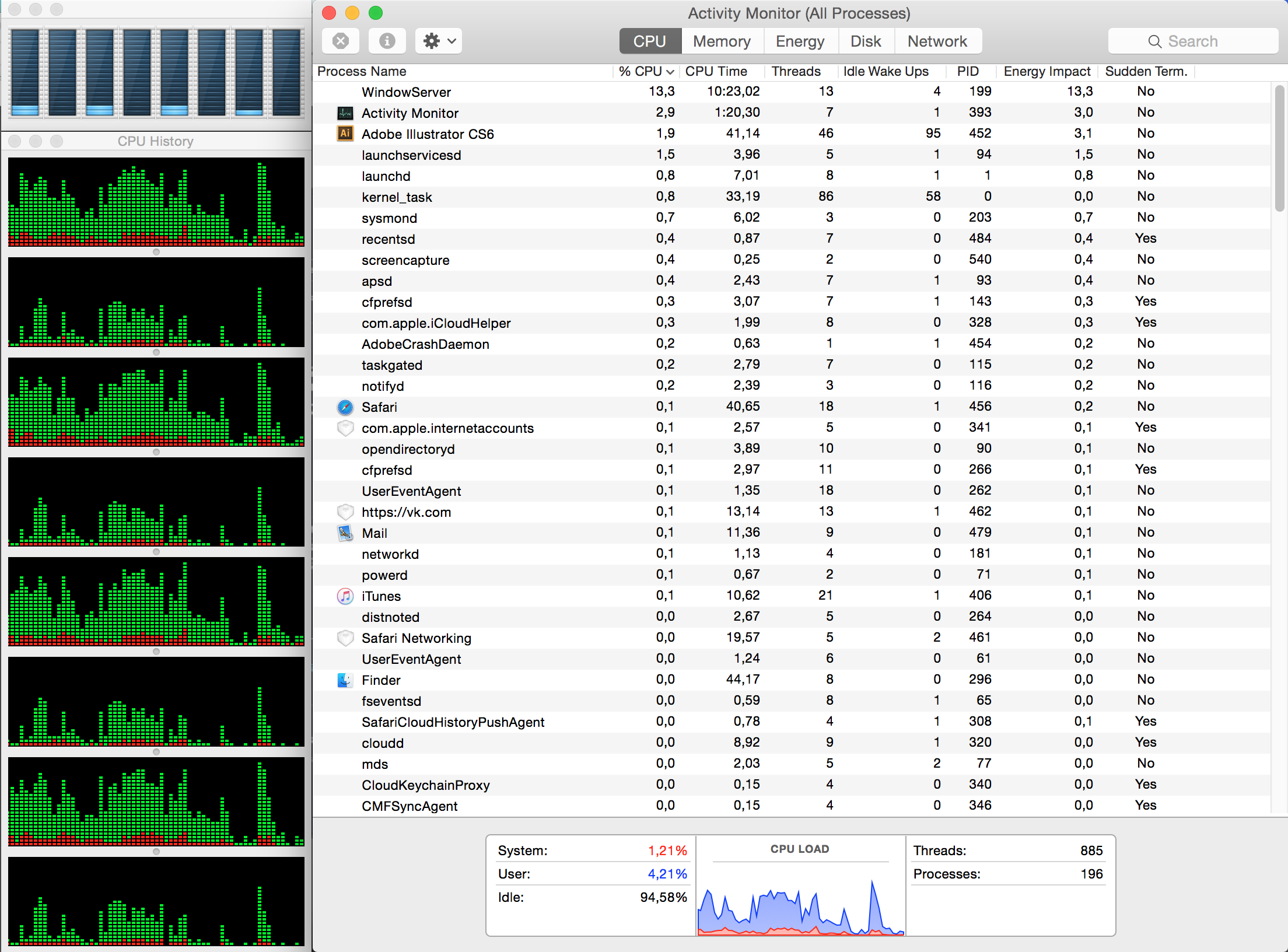 Interestingly, the computer seems to shut down properly from Safe Mode. Once again though, some window animations are extremely slow to render here, producing beautiful scrolling lines.

Then, I booted normally and did roughly the same manipulations. The Monitor from here: 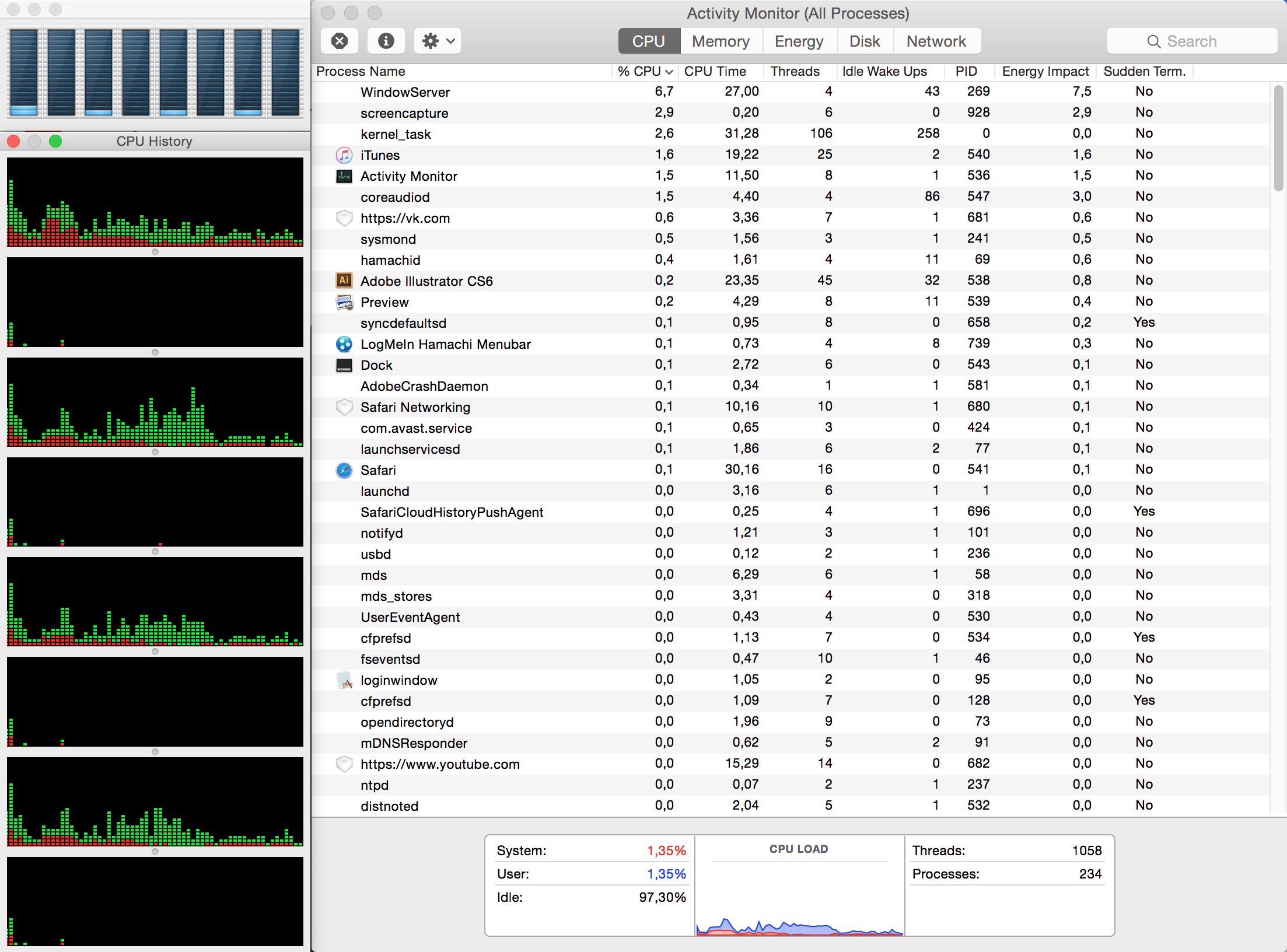 I also tried shutting down in normal mode immediately after landing on the desktop after a restart, which works. So one can assume there is a software gimmick that is causing this problem shortly after startup.

Update 2:
I created a new Standard (non-Admin) account as was suggested, and I think that helped to uncover the exact criminal in disguise — Finder. It seems like everything works nicely (while launching and switching apps), until the first Finder window is open (any folder), which somehow makes Finder unresponsive on shutdown, thereby freezing the latter. This happens on both user accounts. Interestingly, switching to another user and doing a «proper» shutdown (from Apple menu) before using Finder is working (although I guess the «blocked» user's session is still halted abruptly and incorrectly then).

Now, the question is: what exactly is wrong with Finder, and how can I help the little guy?

Update 3:
As suggested, I tried moving Finder cache and preference files to desktop through the Terminal while logged in as a different user, but this doesn't seem to affect the problem.

I could find no crash logs for Finder apart from some short diagnostic reports, and noticed nothing unusual displayed by the Console while the faulty shutdown is in process, but here is an example of some fishy Finder-related events which may be happening during uptime: 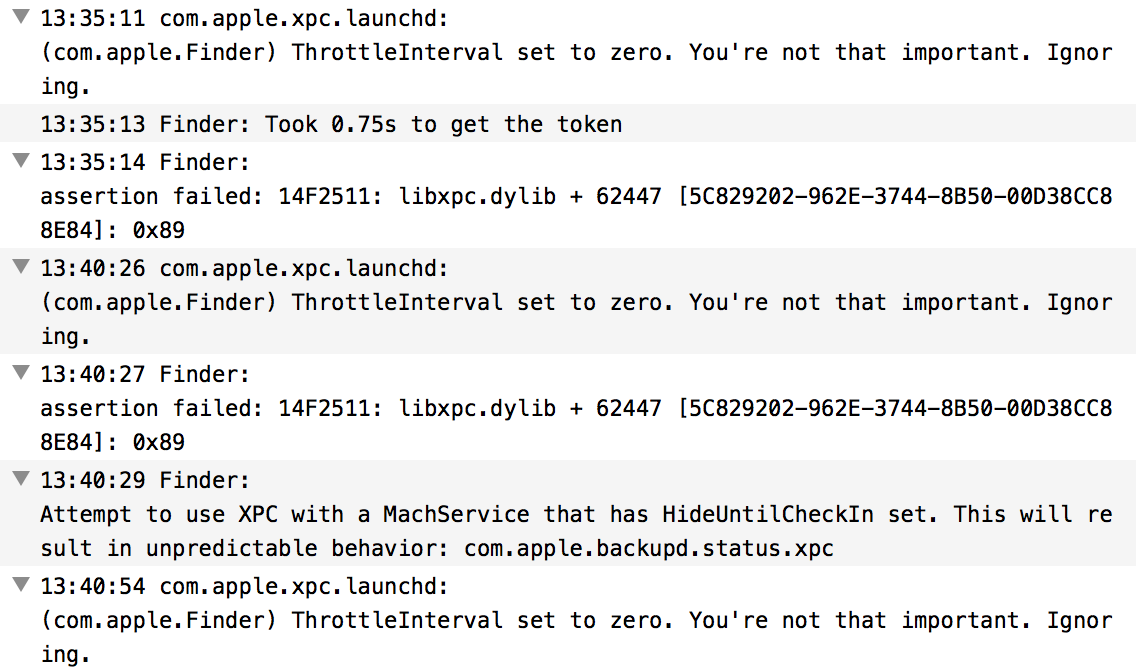 (I do not know how significant these are; the Console spits out things like that from various processes regularly).

Here's what I would try:

All of your Finder preferences will be reset to the defaults, but it might solve your problem.

I think installing new OS X is premature at this time and should remain as option.

But it looks like you have problems with some 3D party apps.

To test... Log in as Different user and see if it works to confirm my assumption.

You can also run the EtreCheck to get a report on your system.

And disable any app launching at start up in user profile log in items.

To find out what the Finder is doing use following in Terminal.

Not the answer you're looking for? Browse other questions tagged macos finder shutdown restart force-quit .

12
How to check what is preventing MBP from graceful shutdown/restart and fix it? [Now with log entries]
4
Mac does not restart, shutsdown instead
0
My mac is rebooting everytime I login
4
Cannot restart Mac, Finder issues in El Capitan
0
MBP won't restart or shutdown (macOS Sierra)
6
Documents or Desktop not Staying in Favorites in Finder Mac
1
Finder not responding
1
Finder constantly not responding/freezing