Slow initial app window opening, but only in certain situations?

I use some apps that can accept files a few ways:

Method 1 is fine and the app responds as expected.

Methods 2 & 3 result in the app opening—you can see the app's menu bar and dock icon—but then there is a delay of 4 or 5 seconds before the app window appears.

But why the delay? What is macOS doing? How can I remove the delay?

So it seems that the app is for an as yet unknown reason tied-up opening its com.organisation.AppName.savedState from ~/Library/Saved Application State/. I found this out by using FSMonitor whilst launching the app and confirmed it using AppCleaner.

Looking inside the .savedState file I can see that there's a file restorecount.plist, present for exactly as long as the delay, which contains an incremented number which on my install of macOS is about 544,000,000 right now. Half a billion windows restored since Mac OS X 10.7 Lion! The ID seems to be system level, as even the Guest user has roughly the same number in its savedState files.

I'm still interested to know why a new account has faster generation of the restorecount.plist file whilst "old" accounts can be a lot slower. 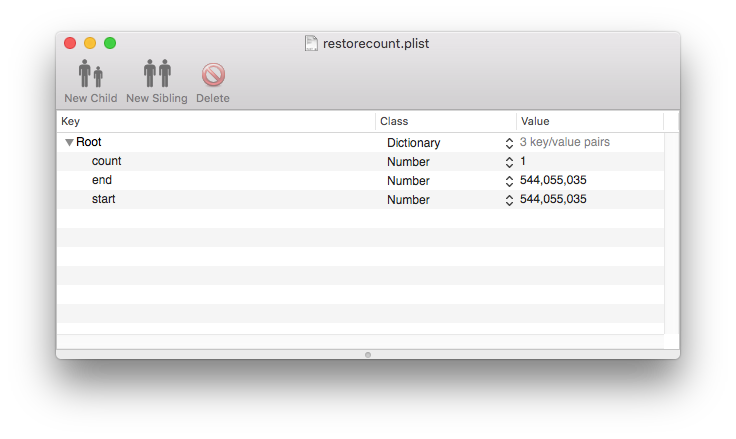 The workaround is to either:

Further discussion at this GitHub issue.

The app is probably opening. The video isn't clear if the app is already open.

This is common to all apps. Using excel's dialogue to open a file is instantaneous, while quitting and opening a file takes a couple of seconds.

As to using a guest/new user, the less processes and RAM that is being used will increase how fast the app opens.

Not the answer you're looking for? Browse other questions tagged finder applications macos performance .

2
Where can I find the "restorecount" value macOS uses to track open windows and reset it?

48
Is it possible to always show hidden/dotfiles in Open/Save dialogs?
9
Mac OS X Mavericks freezes, stops responding when running out of memory
1
Mac app for automatically closing / opening certain apps according to profiles?
4
How to set default Finder window size for *all* situations?
4
How to 'unregister' a file type / MIME with launch services
1
I suddenly cannot open any files in Script Editor.app
3
Force an app for macOS 10.12 Sierra and later to run on OS X Yosemite 10.10
0
How to remove additional vertical line from dock created by Automator app
0
macOS error: The application is not open anymore