Well, that last post was a disaster on my part. Alright, let's try this again:

I am using a 13" (Sorry, my memory was fuzzy and typed 15" on the last 2 posts) non-retina 2012 Macbook Pro with one SSD drive and a Hard drive and is currently trying to dual-boot Windows 10 for work purposes. Boot Camp will not let me get past this screen no matter what I tried

I decide to compromise on using Unetbootin to flash Windows 10 onto my USB. Sadly, life won't go my way. The newest .iso file from Microsoft initially went fine but due to some issues, I decide to use another Windows 10 iso which is version 1607 from July of 2016 and update later. The usb which includes the iso is lent from my acquaintance.

The issue arises at the Windows Setup choosing screen where there were a few problems (I'm really sorry, I will update the post with images as soon as possible but it's pretty late here already.)

Here's the diskutil list (With the partition currently removed):

list disk from diskpart returns something like this: (Again, really sorry about having no images, I will update them soon)

disk2: 14gb and 0B free (Boot usb...?) Additionally, under GPT, disk0 and disk1 both have * while disk2 doesn't. Not sure what it is but I hope it is worth mentioning.

Can someone help me proceed the Windows installation? I'm in a bit of a pickle here.

P/s: I saw solutions regarding wiping the drive and create a partition in diskpart and proceed from there. I sadly can't do this method because I do not have any external drive large enough to backup my hard drive and I couldn't just go wiping it either as it contains some important stuff. 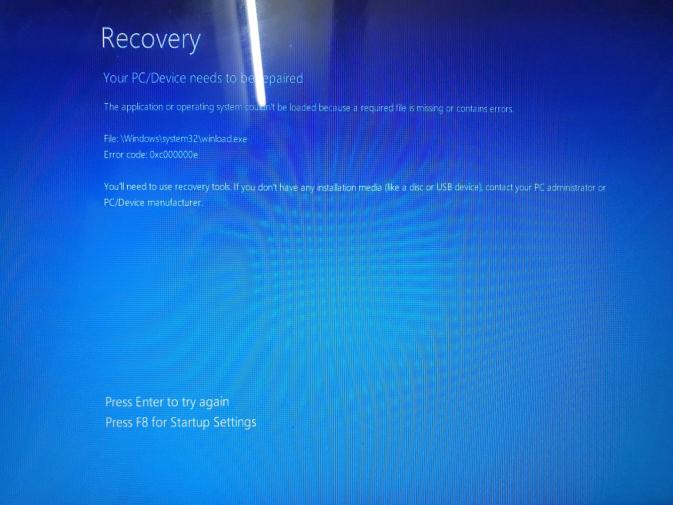 (Yeah, don't quote me on this, I don't know either but somehow the hard drive turned back to D from E. Could be the results from me attempting the installation again a few times, though I'm not sure)

Creating a Partition on Each Internal Drive for Windows

Based on the information posted in the question, the following command would create an approximate 100 GB partition for Windows on the HDD.

To create a 50 MiB System Reserve partition on the SSD, the following command could be entered. However, you may have to move some files from the SSD to the HDD, if the SSD is out of space.

At this point, the USB flash drive can be BIOS booted and the internal drives are hybrid partitioned.

In order to use the GUI provided by Microsoft to install a BIOS booting Windows 10, the installer has to be BIOS booted. Since the Mac Startup Manger can not properly instruct the firmware to BIOS boot the flash drive, the rEFInd Boot Manager is used instead. This section continues from where the previous section left off.

Either select the red box with the white X or press the command+esc key combination, then select the Yes button. Immediately hold down the option key while the Mac restarts. When the Mac Startup Manager icons appear, select the icon labeled rEFInd.

When the rEFInd Boot Manager icons appear, select a Windows icon showing a small flash drive, as shown below. The description displayed should contain the word "legacy". An example would be "Boot Legacy OS from whole disk volume". Note: More than one icon may appear.

When BIOS booting from the flash drive, a long time may pass before anything meaningful appears. Be patient! Once the installer appear, proceed and install Windows 10. When asked: "Where do you want to install Windows?", do the following.

Thanks for the answer! Although..., everything seems to be working so far, on the gdisk part I get this error after skipping setting bootable flag for MBR partition 2: GPT partition #3 does not exist or is too big; skipping. Unused partition space(s) found. Use one to protect more partitions? (Y/N):

Normally, I would use the output from the command below to determine what should be done next. (If drive letter and/or disk number you determined is different from D and 0, respectively, then make the appropriate substitutions.)

However, this might be difficult for you to post for me to see. Therefore, you could enter the command below which will write the output to the file gpt.txt on the flash drive.

You could then boot back to macOS, edit your question to include the contents of this file.

Warning: Since the SSD is disk 0, you will probably will not be able to install Windows on the HDD, unless there exists a 50 MiB System Reserve partition on the SSD. In other words, you will encounter the following message.

I could include instructions now on how to create this fairly small partition. Or, you could wait and see, if you get the message.

I would be asking the following questions.

You could then enter the command below to see if winload.exe exists.

You could also enter the command below to show the contents of the BCD file.

See if you can post the output from these commands.

Apparently, you can get Windows to BIOS boot from the SSD, but for some reason the Windows software installed on the SSD can not execute the winload.exe file stored on the HDD. I tested this arrangement using a virtual machine and did not have any problems booting. The only difference between the virtual machine and your Mac is your HDD is drive E: and the HDD in the virtual machines is drive D:. I can not explain why your Mac is not using drive D: for the HDD or if drive D: is being used for something else. (Update 3 did ask of the output from echo list volume | diskpart, which was never posted.)

My remaining thought would be to install the Windows boot files on the HDD and see if the Mac Boot Manager or the rEFInd Boot Manager can successfully boot Windows from the new arrangement.

You could UEFI boot from the Windows installer on the flash drive and enter the command below to get the drive letter for the Windows partition on the HDD.

Here, I will assume the Windows partition on the HDD is drive E:. The following commands will write the boot files to the HDD.

You can now try using the Mac Startup Manger to boot Windows. Also, you can use the Mac Startup Manager to boot rEFInd on the flash driven and then try booting Windows from the HDD by selecting the appropriate icon on the rEFInd menu. Since BIOS booting Windows files have now been installed on multiple drives, you may have difficulty determining which icon represents the internal HDD. If using rEFInd works, then we can discuss installing rEFInd to one of the internal drives.

Not the answer you're looking for? Browse other questions tagged windows bootcamp disk-utility partition .

1
Can't modify partitions
1
Why do I have /Volumes/Storage Drive?
10
I think I messed up the Fusion Drive on my 1TB iMac (with BootCamp)
1
Install rEFInd on another partition
5
Create Windows 10 installer USB without bootcamp
1
Boot Camp failed and reduced Macintosh HD partition from 3TB to 1,46TB
0
Messed up 1TB Fusion Drive Partitions (on iMac 5K) - 100% Disk Space used
4
Mounting an external hard disk clone that shares the same partition GUIDs as the source/host hard disk
1
My Fusion Drive Partitioning Seems Wrong/Strange/Wonky
0
How can I recovery my unused space which I merged with Main APFS(Encrypted)