I have a Mac book air 2017 running Catalina. I have noticed my admin account being a little slow. Safari launching slower and some other apps slower

I did a test and made a new admin user. I logged out of my account and logged in as that user. Everything is faster. Safari launches and renders pages faster and just feels snappier

Do you have any other ideas or is it reformat and rebuild time? I haven’t done a fresh install in 10 years and really want to avoid this

"Do you have any other ideas or is it reformat and rebuild time? I haven’t done a fresh install in 10 years and really want to avoid this."

If the problem does not appear in a brand new user account, then there is absolutely no need to erase the disk and reinstall the OS. The OS works fine: only the user account is affected.

Some may suggest packing up and moving to a new user account. The trouble is that if you keep doing this every time you come up with a user-account problem, you'll have a succession of different user accounts, which may cause problems with backups, file ownership attributions, etc. And you'll be none the wiser.

The cause is something in the user's Library folder. It could be third-party software that's set to launch at startup, so test by disabling ALL of that. Don't leave any 'necessary' stuff.

You've deleted the entire user Preference folder, which is overkill. I would test whether things improve after you remove the folder, and then restore it if they don't. Move on to the next folder.

Create all new accounts and transfer carefully files you really need. If I was you I would reinstall the Mac entirely and restart on a clean device. Upload things on Google Drive/iCloud/... and your life will be easier to manage.

It’s a lot of work to declutter preferences and history and plug in in browsers, let alone all the other cruft you accumulate.

The best tool I have to save all that work is Time Machine. I like to back up everything (I do exclude the system folder and all things Apple skips when you exclude system) and then take the plunge.

The alternative is back up and then erase install and skip the migration of the account. Hand migrating back only the documents you need would get the tabula rasa / clean start you have accurately determined is the next step to a faster experience. 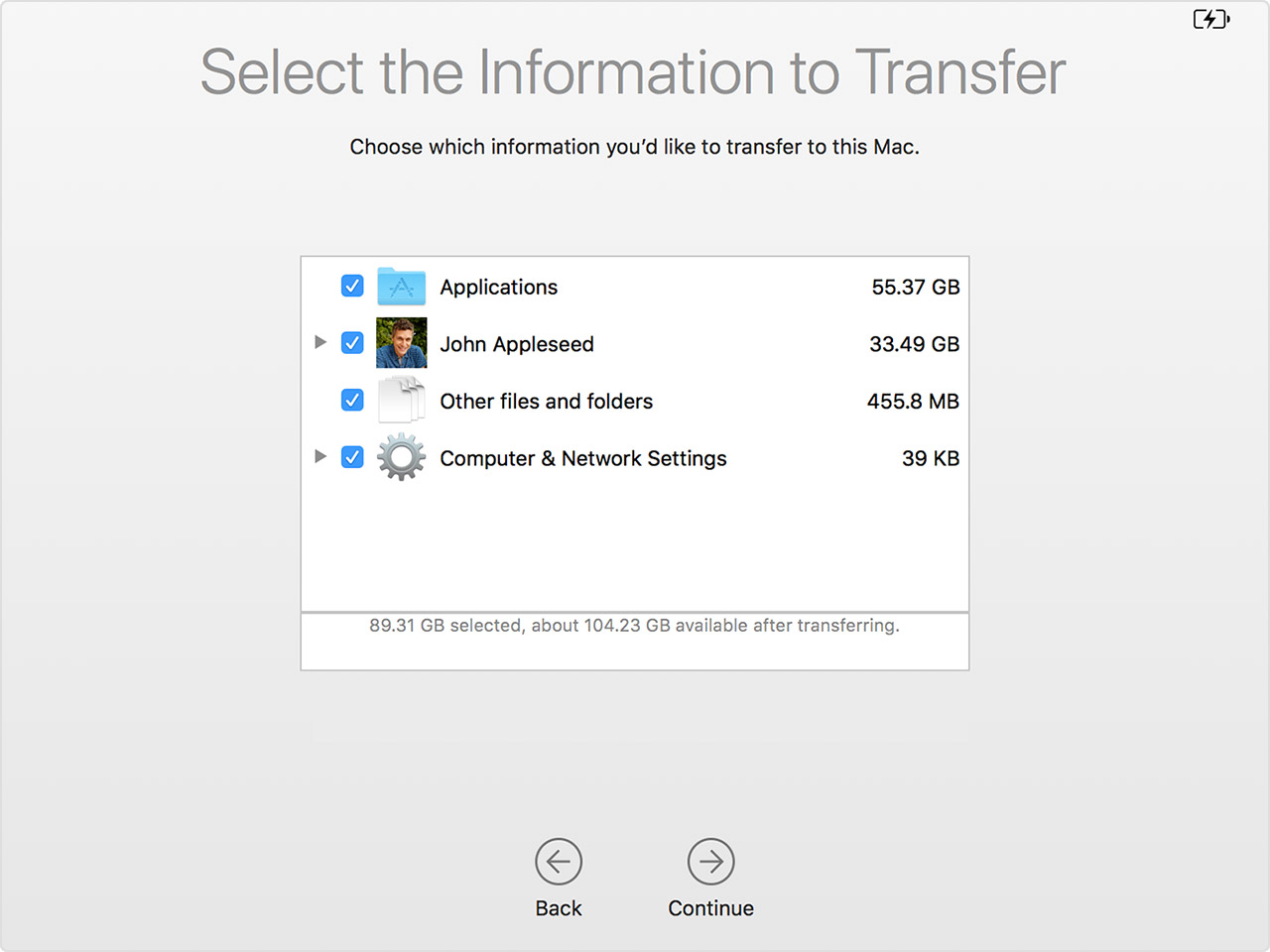 You would deselect everything except the user account “John Appleseed” in the sample image since you’re only deleting (or renaming) and importing the user, not the system.

Good Luck! This is doable and you’ll know you can back up and restore once it’s done.

Oh yeah, you could also run an Etrecheck report, it’s free, then post the results here on forum. It’s a very much loved app among the developers, it gives a no-nonsense insight into what’s going on and where potential issues might hide.

Being slow refers to memory (CPU), not so much to storage or disk errors. Mac is a CPU-intensive OS because of Apple’s belief that ‘unused CPU is wasted CPU’. CPU is gobbled up by running apps, processes, agents, and utilities, especially by pesky 3rd party software (how I hate Adobe! It’s been eating at my CPU even after uninstalling their software, until I manually removed all Adobe’s hidden agents). Therefore, it’s only reasonable that a new account you created is faster - it has less apps, less processes running, less legacy agents and cache stored away in hidden folders.

You can hardly fix this without erasing stuff, but try at least uninstalling apps you don’t use, remove all but necessary browser extensions, don’t run more than one or two apps at a time without quitting them before you open other apps.

Try some tricks from the following article, such as removing all Desktop files, disabling dock animation, removing all but main apps from your dock and using launchpad instead. https://uk.crucial.com/articles/mac-users/how-to-speed-up-your-mac-system

Use Activity Monitor to track CPU-intensive processes. Quit unresponsive or processes that are using too much of your CPU, and be generally aware of what your system is doing. For example, if Siri is re-indexing your drive, you can write off a few hours - it’s a very CPU-intensive process and it’s best to just let it run (don’t lock the screen or power off) than to battle with it. If there are some agents that you don’t recognize and don’t need (always double check by googling so that you don’t quit essential native Apple agents), not only quit, but find them in your Library and bin them for good (like I did with multiple Adobe agents). https://support.apple.com/en-gb/guide/activity-monitor/welcome/mac

I’ve had the same issue and I also dreaded erasing my disk clean and reinstalling, but it’s not as painful as it seems when you store all your files in the cloud and so you only have to resync them once you reinstall. You could use a backup drive and this free app to easily back up your user folder, then fully erase your disk and reinstall macOS. Then you could transfer your user folder from your backup drive onto your newly installed drive, either all or only select folders (only applications to avoid finding and reinstalling your apps, or only library to preserve your settings). https://macdaddy.io/duplicate/

But I wouldn’t advice to backup anything. I would only use cloud (Dropbox or OneDrive) or an external drive to sync your files, everything else, start from a clean slate. What helped me is changing my thinking from “what I have to remove” to “what I have to keep”. Instead of going through all my files and deciding what to remove, I thought and selected what I absolutely have to keep. If I didn’t think about it, or if it’s been sitting there for two years but I never touched it, I don’t need it.

Not the answer you're looking for? Browse other questions tagged safari catalina performance .

3
Issue with deleting a Mac account through system preferences

1
How do I investigate my graphics card problem further?
1
Few of my applications start
1
Safari 10.1: unable to install extension from Apple's official Gallery
2
Cusor won't react to hyperlinks when using Safari
2
Safari 15 for Mac hangs / freezes on launch