MacBook Pro 2013 non retina device has a defective battery which outputs only 7.3 volts. The Macbook cannot run only on the battery - it requires the AC power adapter to be plugged in to power the device.

The battery used to provide 11.1 volts but there may be fault in cells or BMS circuit which is causing it to output only 7.3 volts. 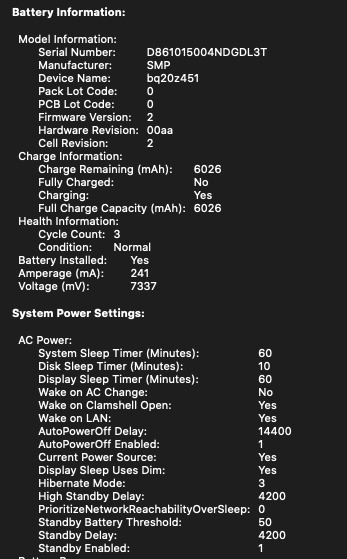 The battery gets charged normally but I don’t know if any power is consumed from the battery by the MacBook.

It’s similar to using Macbook without battery, but Macbook cpu speeds are down when only used with AC adapter. But I notice no cpu throttle when used with 7.3v battery and AC adapter.

I have also observed Frequent short freeze while working with apps.

Is it safe to use the Macbook with combination of defective battery (7.3v)and AC adapter?

If the apps are freezing then the Mac is trying to use the battery for power and failing.

Most (if not all) portable Macs use both AC and battery for short periods (like opening apps). A bad battery can cause crashes and data loss as the Mac tries to use the battery and cannot.

The CPU throttles without the battery because the Mac sees the missing battery and lowers power use. Your Mac has freezes because you exceed the AC adapter slightly. I assume a larger power demand will cause a crash.

At the very least the battery can swell and bend the Mac, and can sometimes catch fire if the defective cell cannot turn off. It would be safer to remove the battery and use on AC.

With only 3 cycles the battery looks like it was constantly full for 8 years (non-retina device) so it is time for a fresh battery. Batteries need to be used occasionally.

2
How to use a MacBook always wired like a desktop/MacMini?