I use Fork and I'm trying to set up a custom command that will open a file in Vim. I'm not using MacVim, so the command needs to open a terminal, preferably iTerm2.

Executing /usr/local/bin/vim doesn't work because there's no terminal, so my command needs to launch a terminal and run Vim inside it. I think the open command should work:

This opens a new iTerm2 tab and Vim launches inside it, but the file isn't opened. :ls shows that I'm editing a new buffer. If I pass the -h flag instead of a filename, Vim opens normally, so it's definitely not receiving the argument (or else it would display the help text instead of opening).

I get the same result even if I run the open command at the terminal, so I don't think this is Fork's issue.

Is there a command I can execute that will launch a terminal and run Vim inside it, passing an argument to Vim? 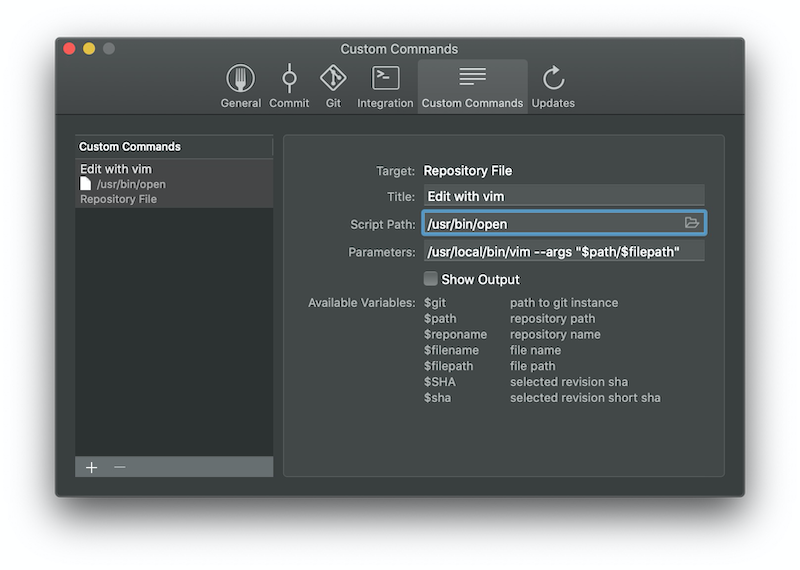 This only works with iTerm2, but I ended up using the following script I modified from one Stack Overflow that opens a new tab:

This opens a new iTerm window, runs vim inside it, then exits the shell when vim exits.

10
Use MacVim as standard Terminal?
1
Why does Terminal swallow Ctrl+up/down keystrokes?
1
"open -t" vs. "open -ef"
2
OS X Terminal window disappears on launch
0
How do I change the path that is being searched for launching an application?
1
OS X copy paste into Terminal adds fdbf bfb9 b083 to beginning and end of selection
1
Terminal Crash on Macbook Air 2011, Mavericks
1
Launching commands in separate windows using bash