Is this magnetic connector for iPhone approved by Apple?

One of the problems with iPhone/iPad cables is that they get bent and damaged. There is a smart idea floating around about a magnetic cable similar to the MacBook one. The lightning connected is attached to the iPhone and the cable gets connected to it because it magnetic 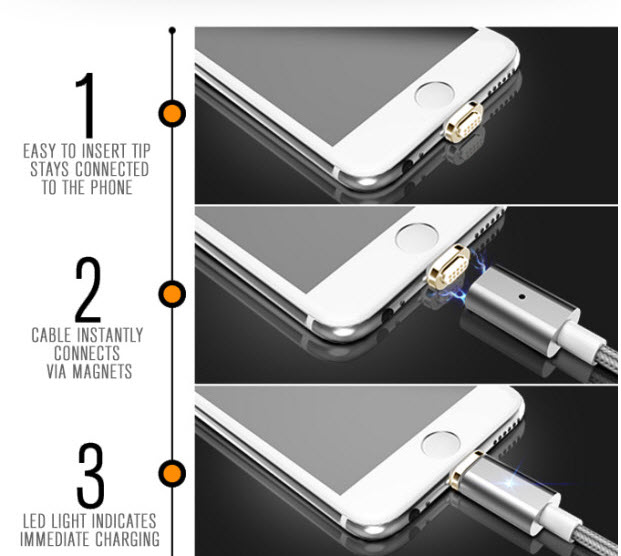 Kickstarter and indiegogo have more than one project promoting this concept.

I would love to purchase one of these cables but from a previous experience I can say that any lightning that isn't approved by Apple will cause endless problems.

One of the projects' developer claim that his lightning is approved by Apple, below is a quote from the FAQs which I failed to understand

Why have you not chosen to use the original lightning connector or have MFi certification?

Apple has not released a magnetic lightning connector, hence it is not possible to apply for MFi certification and by producing a lightning connector that is not MFi certified, it leaves that company open to legal action by Apple. Any company claiming to have MFi magnetic connectors would not be truthful as of April 2016.

Is he saying that his cable is approved by Apple or not? What about other products?

They're saying Apple hasn't approved any "magnetic lightning connectors" so they and their competitors are selling non-certified connectors.

Apple's patent 7,311,526 covers their Magsafe technology, which these lightning connectors could easily infringe upon.

I wouldn't go near any of these while they're in a Kickstarter/Indiegogo phase.

Not the answer you're looking for? Browse other questions tagged iphone ipad .

0
iPad “Not Charging” with 3m USB-dock-connector cable
3
Will generic lightning cables and the “authentication chip” present in the genuine cables work with iOS 8?
1
Why isn't my iPhone 4S charging (apparently) only in some places?
2
Broken iPhone dock connector pins, is this a hazard?
4
Is the Lightning connector safe for my children?
1
iPhone not charging from laptop?
14
Is this Apple charger cable genuine?
0
Is there a lightning cable power splitter / double charger?
2
iPhone 5s shows low battery symbol with lightning bolt when plugged in