Am I wearing down my internal SSDs quickly or is it more likely they're wearing out naturally?

A few days ago I learned that my internal SSD is failing. I have a a MacBook Pro (Retina, 13-inch, Early 2015) running Big Sur, and my hard drive is an APPLE SSD SM0256G. I got the laptop in 2017 and the original hard drive failed in 2019. I got the drive replaced late 2019 and now this one is failing. I understand that SSDs can die at any time and it's inevitable, but considering both drives died in under 3 years I kind of feel like it's something I'm doing/did.

Here are a few things I suspect.

Here are screenshots of my S.M.A.R.T. data and also info about RAM and swap usage. 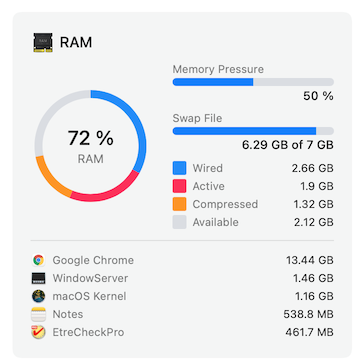 I'm uneducated and confused about all of this so I have no idea if the numbers I'm looking at are normal or abnormal for an SSD I've had for 2.5~ years. I'm trying to figure out if it's more likely something I'm doing or if it's natural. If it's something I'm doing, I want to take the best care of my next one as possible.

It seems you are using your computer quite a lot and to the limits of its capabilities. This is not a bad thing - essentially it just means that you're getting a lot of value out of your purchase.

Regarding your 4 points of "suspect". Using "hardware acceleration" in Chrome does not have anything to do with your SSD. The remaining three points each mean that you're probably using the disk frequently in your work - for example you probably have lots of swapping.

Using your disk is not a bad thing in itself. That is afterall what the disk is there for.

Looking at your SMART values, it seems you have effectively overwritten the full disk almost 4.200 times. That's a lot - so you cannot really blame the disk for warning that it is near the end of its life time. SSDs are a wear part and you will use them up while using your computer.

Is it something you're doing? - Yes. Is it natural? Also yes.

The only realistic thing you could do with your current hardware is to ensure that you're only running the programs you actually need at any time. I.e. close down Chrome while spending your time in Logic Pro. It might help slightly. Is it practical? - not really.

Replacing the hardware is more practical - but of course comes at a cost. If you could upgrade the RAM, it would probably be helpful if you had 16 GB or more RAM instead of the 8 GB you have. But you cannot.

Instead you should consider buying a larger capacity SSD when you replace the current one. Even though you do not actually use the space on the SSD for storing files, the SSD will itself automatically use that extra space for wear-levelling. If you use the disk in the exact same manner, a 512 GB disk will in theory last twice as long as a 256 GB disk.

I would consider $69 every 3 years a relatively inexpensive wear part!

Not the answer you're looking for? Browse other questions tagged hard-drive ssd hardware google-chrome memory .

4
Should I Move The Swap Location For My Mac From The SSD To The Larger HDD In My Laptop?
21
Is RAM upgrade worth it if I have an SSD already?
1
Is it possible/a good idea to use an ExpressCard SSD for swap?
2
Would and SSD or RAM be the better upgrade in this situation?
2
MacBook Pro (2012 - MD101LL/A): Superdrive to SSD swap?
1
Option/speed Q's about best configs to upgrade early 2008 Mac Pro 8-core to SSD
0
Less RAM and an SSD vs. more RAM and an HDD?
2
Does the 2019 iMac use proprietary SSD controllers or connectors?