macOS 10.14 Mojave is Apple's fifteenth major release of the macOS operating system for Macintosh computers. macOS Mojave was announced June 4, 2018 at WWDC and was released for public on 24 September 2018. 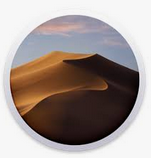 macOS 10.14, Apple's fifteenth major release of the macOS operating system, is officially documented here. It is the first version to require Metal graphics (available on 2012 Macs and later) to boot to the GUI, since Apple removed OpenGL from the system.

Is it possible to rename an USB or Bluetooth audio device?