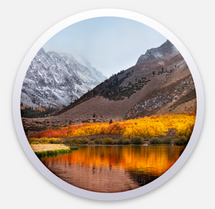 macOS 10.13, Apple's fourteenth major release of the macOS operating system. Rather than offering radical new features, macOS High Sierra (10.13) is a refinement of macOS Sierra (10.12). Among the apps with notable changes are Photos and Safari.

Screen Saver Stuck On, How To Escape?

'Always on top' window on macOS