Apple TV is small device that connects to a TV using HDMI and is capable of streaming content from iTunes, Netflix, and many other sources, and which supports third-party apps as of the release of the fourth generation. This tag is for questions relating to Apple TV hardware and software. 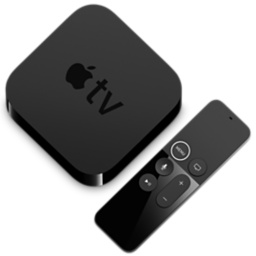 Apple TV is a digital media receiver developed and sold by Apple Inc. It is a small form factor network appliance designed to play digital content from the iTunes Store, Netflix, Hulu Plus, YouTube, Flickr, iCloud, MLB.tv, NBA League Pass, NHL GameCenter, and many others. It can also interface with any macOS or Windows computer running iTunes to stream music, movies, and other content.

As of the release of the fourth generation of hardware, Apple TV gained the ability to run third-party apps, and there is now an Apple TV-specific App Store accessible from the device.

This tag is for questions relating to Apple TV's hardware and software.

How to use multiple audio outputs (of a mac) simultaneously?

How to stop iTunes from automatically downloading purchased TV shows?

Is it possible to use an Amazon Echo with HomeKit?