I've not got a great Wi-Fi setup here at home and it sometimes results in failed Time Machine backups. Is there a way of specifying that Time Machine only backs up under certain circumstances - i.e. Ethernet connection is active...?

This is an alternative to the other script I posted. This one runs in the background and tests the network connection every two minutes to determine if it is using an Ethernet connection or wireless. If on Ethernet, it enables Time Machine; when the connection switches to wireless it disables Time Machine.

While connected to Ethernet, you will need to run one command manually to confirm which interface Ethernet is assigned to. Run this command:

It should output a screen full of information. What you are looking for is a section labeled en with a number after it, and whose last line is status: active, like this:

Note the number next to en at the beginning - this is the interface that your Ethernet connection is running on.

In the script below, where it says set wired_interface to "0", change the 0 to the number next to en in the above output. (It should be 0; if you are on a Mac Pro, it may be 1.) Also in the below script, at the top where it says myusername, substitute your own Mac username.

⌘+s to save. In the Save property sheet, set the File Format as Application, and check the box for Stay open after run handler. Save it wherever you like - Desktop, or Applications Folder - it really doesn't matter, just know where you saved it. 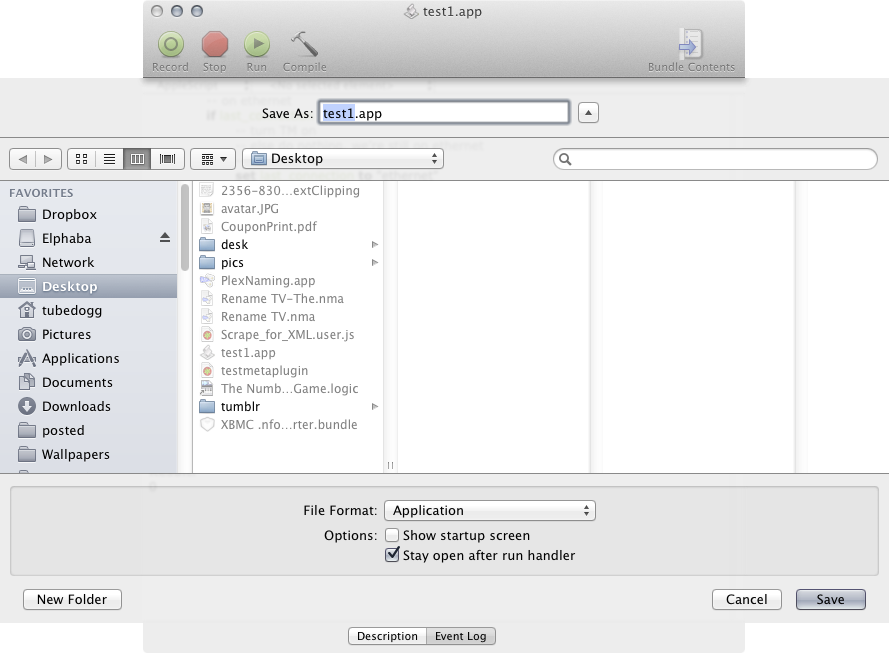 Paste the following line in:

Press control+x, type y and press return to save and exit. Then run this command:

And in this file paste the following line:

Again, control+x, then y and return to save and exit.

Next, enter these commands:

Step 4: Setting Up sudo to Run Without a Password

Letting the Terminal command sudo run without a password can be very dangerous. That's why the steps above created the shell scripts in their own directory, so what can actually be run is limited.

Enter the following command in Terminal:

This may bring you to a (mostly) blank screen, or it may have some text in it. If it's blank - that's fine. You'll just paste the below line at the top. If text already exists, that's also fine; use your down arrow to go right below the lines already in the # User privilege specification section, as seen in the below screenshot. 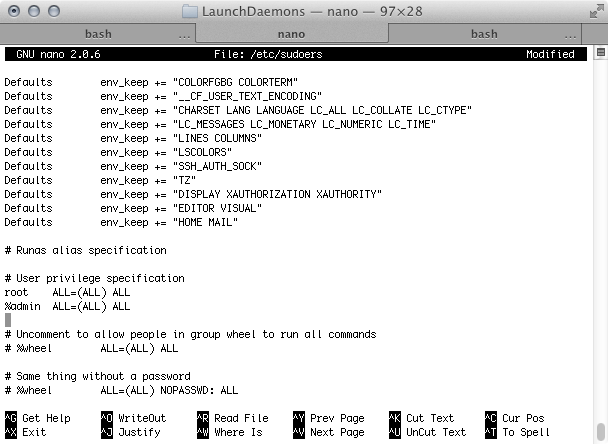 In both places where <yourusername> appears, replace it with your Mac username. Press control + x, type y and press return to save and exit.

Test that these files turn Time Machine on and off by running the following command (assuming Time Machine is currently on):

After a moment the Time Machine icon in the menubar should turn gray, indicating Time Machine is turned off. (You may need to click the icon for it to reflect the change). Assuming this works, run this command:

And Time Machine should be re-enabled.

And Off You Go

Run the application you created in AppleScript Editor above, and it will remain open, enabling and disabling Time Machine as your connection switches from Ethernet to wireless and back. To disable switching, simply close the AppleScript application (right-click on the icon in the Dock and choose Quit).

This AppleScript will check if the Ethernet connection is active, and then run a Time Machine backup if so.

First, disable Time Machine in System Preferences. The below method will run it automatically.

While connected to Ethernet, you will need to run one command manually to confirm which interface Ethernet is assigned to. Run this command:

It should output a screen full of information. What you are looking for is a section labeled en with a number after it, and whose last line is status: active, like this:

Note the number next to en at the beginning - this is the interface that your Ethernet connection is running on. In the script below, where it says en9, replace 9 with the number from above. (If you have a Mac Pro, it will most likely be en0 or en1. Otherwise, it will likely be en0.)

Next open up Terminal and type the following command:

This will open up a text editor to allow you to schedule this script to run on an hourly basis, just like Time Machine does by default. Paste this line:

Press control+X then type y and press return to save and exit.

To disable it, go back into Terminal, again use the command:

Then delete the line you added above and use the same steps to save and exit.

You can open you Network Prefs and make sure Ethernet is the top connection in the service order. You can see what I mean in this screenshot, I hope.

Then, if Ethernet is connected you should always use it as your primary connection.

See here for how to set the service priority: http://osxdaily.com/2013/06/15/set-network-connection-priority-mac-os-x/

Not the answer you're looking for? Browse other questions tagged network time-machine script automation .