I have a bash script that works like a thread. Now I'd like to turn it into a service with Automator.

Input is set to Image Files in Automator and the shell script action is set to Pass input as arguments.

However, no error shows up in the log and the shell script result is empty:

What the script does:

The function createDatePath checks if the passed image is formated like 2020-08-10-demo_image.jpg and creates a folder YEAR/MONTH/ in the target directory. The if condition performs actions on the input depending on whether it's an JPEG or an PNG, and whether the date string is followed by a -qq- string. This is a trimmed down version of the script (I have some of more if conditions, but we don't need them here I guess). 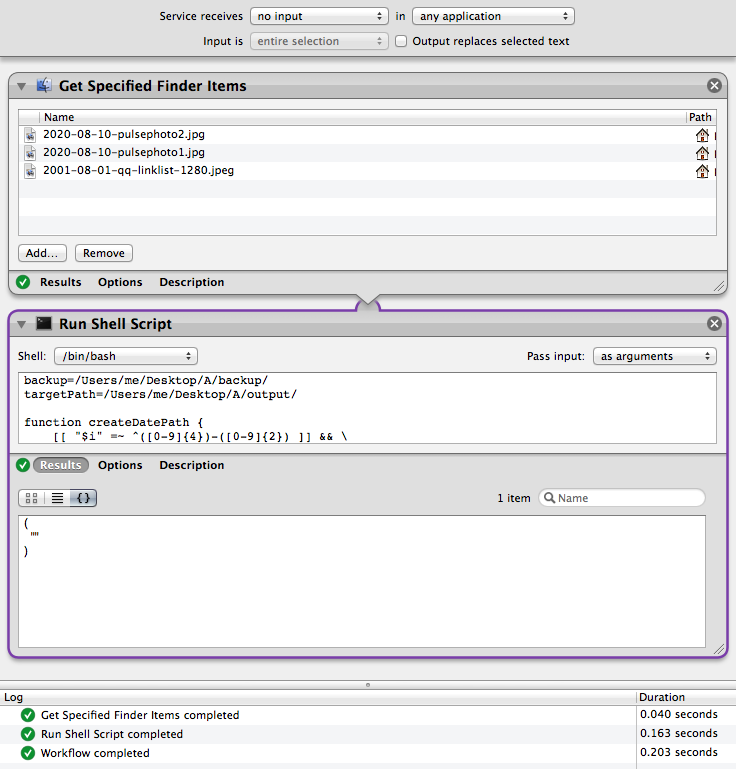 If anyone could explain to me why this doesn't work and how to make it work that'd be great.

PS: In the non-Automator script the first thing I did was cd into the source path, but I since this will end up as a service which takes files as input my guess was that I can omit this (adding cd "$@" didn't do any good).

The arguments Automator passes to the script are absolute paths. You can convert them to basenames with something like i=${i##*/}.

Not the answer you're looking for? Browse other questions tagged automator bash script command-line automation .