Can anybody explain how can I do this:

and each element will create a nested structure of folder in current directory.

So, if I choose in nested folders->template one, it will create in current directory nested structure of folders with template one.

Everything works fine, but I can't understand how to tell Automator to create nested empty directories. What Automator did instead?
Suppose I choose folder '/pathToFolder/ParentFolder/SourceFolder'.
If I select 'Folder' and hit 'makeNewCustomFolder', Automator would create a 'CustomFolder' like this:

The following AppleScript creates a folder structure of the form

within the frontmost folder in Finder. Here it is:

I've deliberately tried to keep it basic. All the structure is declared in the second tell block, and hopefully it should be easy to see how to extend it. If you want to test if before attaching it to a service, copy and paste it into AppleScript Editor (in the Utilities folder).

This script is fairly naive, and throws an error if the folders already exist. If that's a case you might be working with, then this question on Stack Overflow explains how to modify a script like this and only create folders that don't already exist.

If you want to create lots of folders with similar names (folder001, folder002, ..., folder999), then this forum thread on Apple Insider may be helpful.

You then want to bind this to a service in Automator (which I see from the question you know how to do). The service should receive folders in Finder, and you use the Run AppleScript action to run the script.

Once you've got that service installed, you can right-click on a folder in the Finder, and there'll be a service which creates this structure for you.

To get the different templates, I can think of two methods. 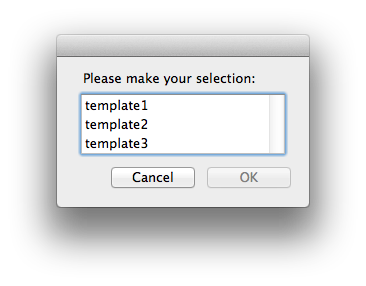 and which option we choose dictates which folder structure gets created. Here's the relevant code:

Replace the lines starting with -- with the folder generating code that we discussed above. The list in the first line gives you a list of choices, and then you create an if block for each choice that generates the appropriate folder structure.

If you use this AppleScript in Automator, then the procedure is exactly the same, except now you get the choice when you run the service in Finder.

Not the answer you're looking for? Browse other questions tagged mac automator .

0
How do I use Automator to add files download via Transmission to iTunes?
3
Create a zip file using an Automator Service
2
Automator won't execute my bash shell script
1
Automator: Change to selected directory and run shell script
4
How to create an Automator service to run a script on all files in a folder
3
MacOS Automator: Save new text file in current folder
0
Automator workflow to split PDF
0
Automator: “Ask for Text” pass to “Rename Finder Items” possible?
2
Automate moving and renaming files