I am trying to update software on a Macbook. Before doing so, apparently I have to "Sign in to download from the App Store." It provides me with a form asking for an Apple ID and password to do so.

However, the Apple ID field already has an Apple ID in it, which is not the one I wish to use, and the field is disabled, so I can't change it.

Why is the field disabled? How do I enable it so I can change the Apple ID to sign in with?

Shane Hsu's answer is correct, but there is also another way to do it if you don't want to delete the app: There is one file for each app that contains the "receipt" for that app's previous download from the Mac App Store. The file is named receipt. Here is how to find it and move it to a different location, so that the Mac App Store will allow you to enter a different Apple ID:

Find the app in your /Applications directory:

In the new window that has opened, double-click the Contents folder to go into that folder.

You will now probably see a folder named _MASReceipt. "MAS" stands for "Mac App Store." It should have a file inside of it named receipt: 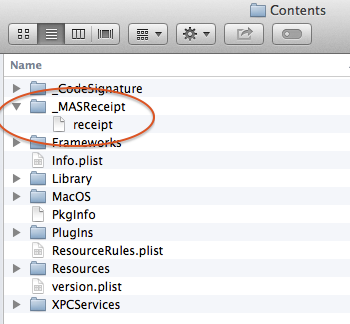 Move the _MASReceipt folder to the trash: 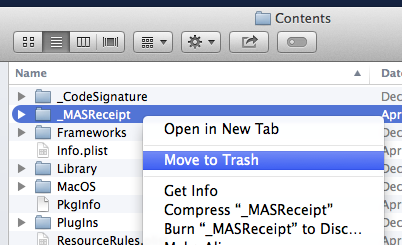 Now, close the Mac App Store and then launch it again. Hopefully, at this point, when you try to update the app, its Apple ID field will be empty.

If this doesn't work, you will probably want to put the _MASReceipt folder back, by opening the Trash:

It is disabled because each app downloaded from App Store has a receipt that links to one specific account.

And that app you wish to update is linked to the account that is already filled in for you.

If you wish to update the app with another account (assuming the app is purchased on both account), you will have to first delete the app, and install again.