Why is my Mac using so much memory?

When I got my Mac Mini with 4GBÂ RAM I thought it would be enough, since on my Windows machines I never hit past 3GB â€“ but I was wrong. So I ordered 16GB of RAM, but one of the sticks was bad, so I have 8GB in one channel and 2GB in the other, totalling to 10GB RAM. 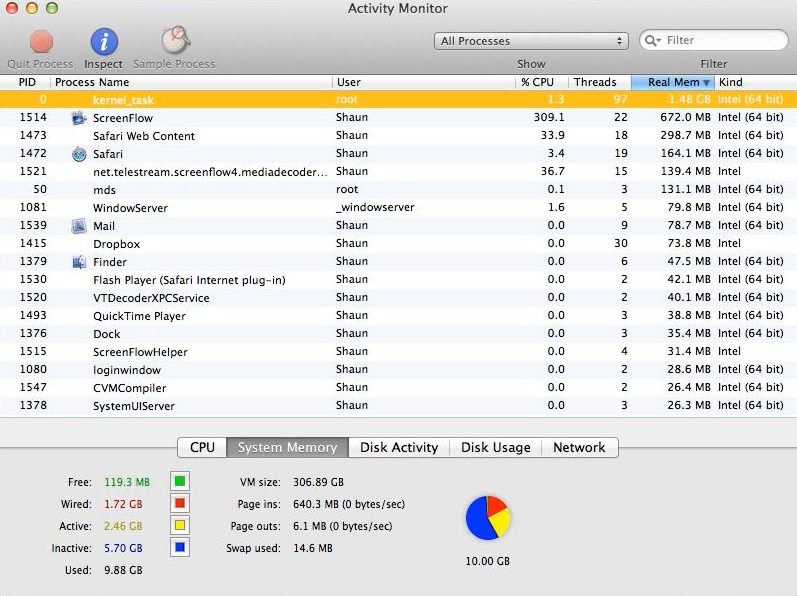 Normally this is more than enough to have a virtual machine open, whilst playing games and doing some heavy work at the same time. Today I finished recording a video and started to encode it on ScreenFlow when I realised it said it would take an hour! It normally takes a few minutes, so I opened up Activity Monitor and saw all of my RAM was being used!

I neverÂ saw that before â€“ I only had ScreenFlow open by itself. After looking at the processes, I noticed there was nothing major hogging up the RAM, so what gives?

It's the first time this has happened! IÂ saw a page out since putting the new RAM in as well. Why is everything so slow? This is my first Mac, so I hope I don't have to fiddle around with something like a registry or anything. I am willing to answer any questions and do any tests.

Dont worry about the inactive part, this doesnt mean that your mac will run slow, macintosh keeps these inactive(as IDLE) where when programs needed*-(the ones that you've been using)-* then accessing them would be faster since they are still in a way or another in memory regardless of swapping being in process.

And if your scared of the inactive blue color eating the pie chart displayed, then open your terminal and type: "purge" to clear your inactive space.

See: apple.stackexchange.com/questions/52013/why-is-it-that-my-mac-would-rather-swap-than-clear-inactive-memory?rq=1 It doesn't actually provide an answer, but it explains what's going on. I've been having the same problem at least in Mac OS 10.6 and 10.7 (and maybe 10.5). The only "fix" I've been able to find is to manually clear the memory cache when this happens. I know of two ways to do this:

I think there's been some debate around this, but personally I don't understand why the memory manager keeps so much inactive memory unavailable while the system starts swapping.

Not the answer you're looking for? Browse other questions tagged macos mac memory .

8
Why is it that my Mac would rather swap than clear inactive memory?
7
Process using more memory than I physically have
1
My Mac recently using RAM like hell?