I'm a developer, and I'm working on a cross-platform app that have to run on Mac OS X, Win7 and Win8. Unfortunately it's impossible to test my app in VM due to some hardware restrictions, so I have to install all of them on bare hardware.

I've bought Mac Mini 2012, but unfortunately I cannot find out how to install all 3 OSes on it. Boot Camp only allows to install single instance of Windows.

Is it even possible to have Mac OS X, Win7 and Win8 on the machine (with and without Boot Camp)?

I have done this myself. First install REFIt, an utility for dual/triple booting. It adds a useful selection of OSes on startup. It also includes a EFI/MBR fixing tool which is very useful. You might need to restart 2 times. Using the Disk Utility, add 2 more partitions to your disk. Format them FAT or FAT32. Restart your machine, and this time, assuming you have installed REFIt, instead of choosing OS X, navigate to the partition inspector (the hard drive icon). Just apply the settings it suggests.

Reboot your mac and put the windows 8 disc in. The setup will allow you to format the partitions. Format both of the partitions. Install to the first partition. After installing drivers (optional) etc on win8, restart and install win7 to the other partition.

Sometimes the Win8 will find Win7 installed and integrate the bootloader. That means that in REFIt, choosing either one of Win7/Win8 won't boot. Choosing Win7/Win8 from REFIt will give you the option to boot Win7 or Win8. Hope this helps.

NB: Your Windows partitions won't be named. REFIt won't know which is win7/win8. Or you can name it when you've installed the first Windows.

Perhaps you are trying the wrong strategy.

Given your needs as a developer, why not consider purchasing two inexpensive Windows PCs, one to run Windows 7, and one to run Windows 8, and then hooking up those two machines and your Mac mini with a KVM switch so that you can use the one keyboard, mouse and monitor to control all three computers, which are all up and running simultaneously?

It seems to me that you would save a great deal of time because you would never have to reboot into another OS to test something. With only one monitor, keyboard and mouse, and the two other PCs on the floor, you would not take up any extra desk space either. 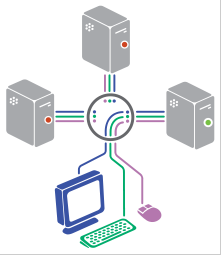 With a router nearby, you could connect all three computers with Ethernet or WiFi and set them up for file sharing through the different operating systems, or using various versions of VNC. Then you could easily move documents and files from the Mac to the Windows 7 or Windows 8 environments in real-time while all three are up and running.

You could purchase new desktop PCs with a 500GB hard drive, 4GB RAM, and a licensed copy of Windows 8 or Windows 7 for perhaps US $300 each.

Alternately, you could purchase only one $300 Windows computer and set that up to dual-boot into either Windows 7 or Windows 8. You would still use the KVM switch between your Mac mini and the one Windows PC, and that would cut down somewhat on the amount of time you lost rebooting between different OS. But I think purchasing two cheap Windows boxes alongside your Mac mini would be the way to go.

Although I do not have a mac mini myself and am not sure that this would work entirely but it theres no harm in giving it a shot.

Proceed with installing either windows 7 or windows 8 as a single partition and follow the boot camp wizard to get it installed like normal.

Once you are in the windows 7 environment, try partitioning the drive and see if you can install windows 8 onto that along with the boot camp drivers and whatnot.

Once again I am not entirely not sure if this would be a solution but its an idea thats worth putting out there. Hope it helps!

I'd also say go for the external drive if you prefer not to hassle with a 3rd party bootloader that is no longer maintained actively. Or maybe the Mini has place for a 2nd internal drive (instead of the optical, if you have a model that still had one). Note that you don't need to reinstall OS X to the extra drive, you can just clone your existing install with a tool like Carbon Copy Cloner. It's always a good idea to have a bootable clone of your boot disk, even with current day Recovery Partitions and TimeMachine backups.

Or, you could have 2 versions of OS X, of course, as a developer that may be of interest too (esp. if you're also targeting OS X 10.6).

Parallels works great for this! I have multiple Linux distro's, Windows 7 and Windows 8 installed AND you can even run Windows software without actually being in the Windows environment, which I love!

Not the answer you're looking for? Browse other questions tagged bootcamp windows efi .