I have jailbroken my iPad for firewall, XBMC and some development things only.

I didn't know before that on the right-hand side near the volume buttons is a switch. In settings I have two options for it: lock screen rotation or mute. I don't need either of them, but I've got an idea on my mind - how about to turn on/off WiFi with this switch? (To save some battery.)

Is there a mod or something that lets me do so?

You could try a custom action using Activator, set up to toggle WiFi when the Silent switch is double-toggled.

I am currently not jailbroken myself (running iOS 7) and haven't used Activator for a while, but I remember that there is an option to activate an action by double-toggling the mute switch, as can be seen in the screenshot below. 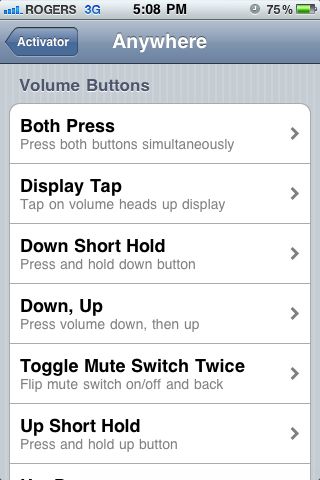 Not the answer you're looking for? Browse other questions tagged ipad wifi .

2
Is there an iPod app to easily switch wifi on and off?
1
What does the mute switch on the iPad do?
22
Wifi doesn't work unless I turn it off then on again
3
How to turn WiFi on\off based on location
6
How to turn off "Enable WiFi" alert message on iOS?
20
Turn Wifi off/on with a single key?
0
Turn off WiFi if there is no user initiated network access