This question is directly relevant to my failing attempts to upgrade the RAM in a Late 2009 White Unibody MacBook (MacBook6,1) to 8GB, and the question may be better asked in that context.

It is widely referenced (most authoritatively on everymac.com) that this model can support 8GB (despite Apple saying the max is 4GB), but in the "System Information: Hardware Overview" screenshots of every successful upgrade, the Boot ROM Version is shown as MB61.00C8.B02 while mine is at MB61.00C8.B00. While it's possible that I got bad RAM, I'm wondering if the earlier firmware version doesn't support 8GB. I did find one other person on a forum with the B00 firmware having the same problem I am ("3 beeps and won't boot with the RAM installed"), but no resolution; he did RMA his RAM at least once.

Apple doesn't show any firmware updates at all for the MacBook6,1 model, so there's nothing official for me to try and re-flash.

Has anyone managed to get 8GB working under B00, or upgrade it to B02?

You could try to manually upgrade your firmware with the fw-upgrade of the macbook pro 5,5. It has been done successfully by several people:

BTW: By doing this, you will probably also fix the MCP79 bug that makes MCP79 negotiate SATA1 with newer SATA3 drives (instead of SATA2). 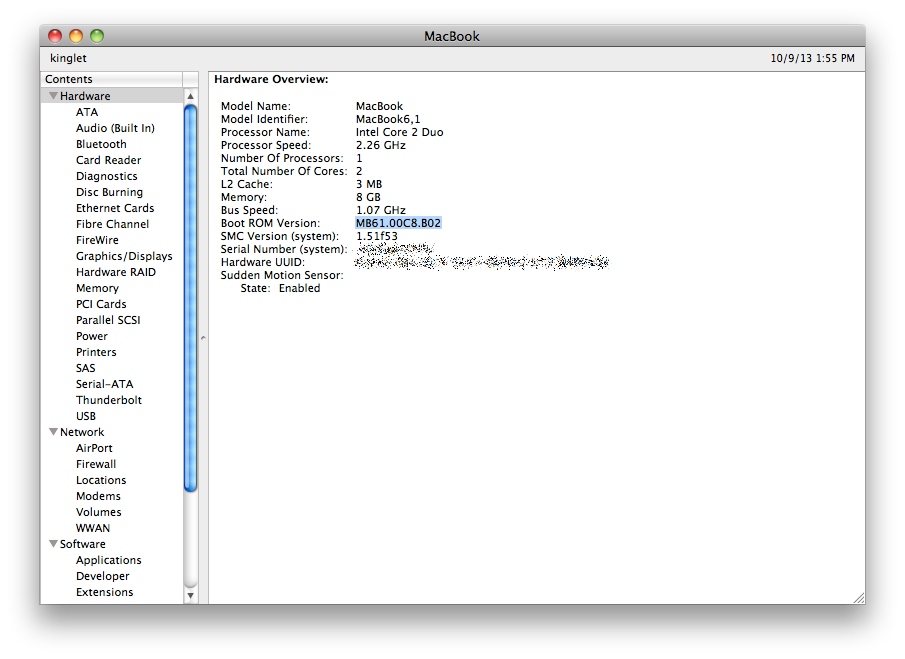 5
Intel Mac mini - maximum RAM Upgrade
2
Where is the EFI stored on the macbook and is it possible to restore a previous EFI firmware version?
1
Late 2009 MBP 15" battery drain on sleep after putting SSD and ram upgrade
0
Macbook Pro (Late 2010) slow after installing Mavericks
0
Maximum memory config for Mac Pro 5,1 (mid 2010)?
0
Less RAM and an SSD vs. more RAM and an HDD?
0
What is the latest operating system that my 2006 MacBook Pro will support?
2
How to upgrade boot rom firmware without an original drive