Is it possible to sync an iPhone with multiple computers? I know the music will be restricted, and I don't mind. I want the contacts, bookmarks, etc. to be in sync across my home iMac and my MacBook.

The best way to synchronize contacts and bookmarks between several Mac and/or iPhone is to use MobileMe (now iCloud). It will sync all as you need where you want.

You actually don't have to buy MobileMe to sync contacts and calendar to multiple Macs and multiple iOS devices. This can be accomplished with only a free Google account. If you want more details on how to set it up, please ask.

As far as I know, there is no way to sync bookmarks without MobileMe.

Actually, I just answered the question to how to keep your device's music library synchronized with 2 machines as well: Sync iTunes U between 2 Macs via an iPod

One way to partly solve this (without paying for MobileMe) is by syncing certain data between different computers using Dropbox. (This approach was suggested in a Super User question about syncing home folders that I asked a year ago.)

These screenshots show what the setup looks like on one of my computers: 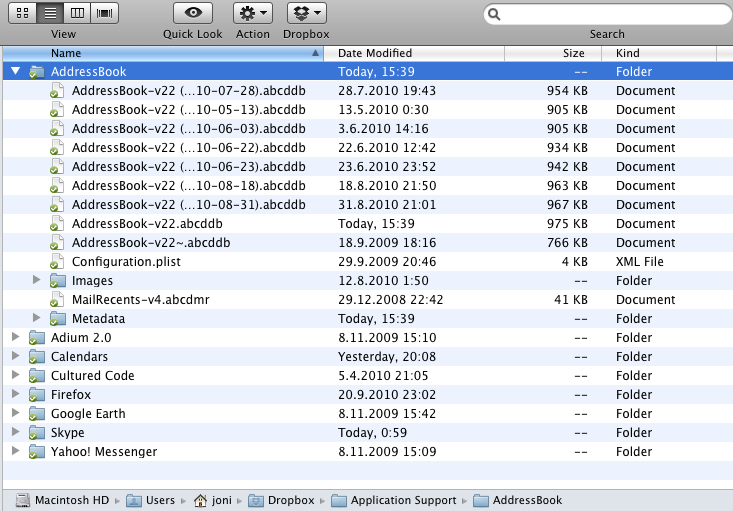 (If you need more detailed instructions, please let me know!)

For bookmarks, you'd need to share some Safari application data (I don't know which files/folders exactly as I haven't done that myself).

Obviously this isn't optimal, but once you set it up, it works pretty well. I think Apple is sooner or later going to provide better (cloud-based, even wireless) sync across multiple devices (also to those who're not paying extra for the service). Well, at any rate they should, as they are lagging behind Google quite badly in this respect.

You can have your music synced to one computer and contacts synced to another - no problem.

Not the answer you're looking for? Browse other questions tagged iphone data-synchronization .

3
Sync iTunes U between 2 Macs via an iPod

10
Can you sync computer with iPhone?
16
Can I sync an iPhone to multiple computers without erasing all the applications?
25
How to synchronize iPhone with new Mac without losing data?
4
Will iCloud sync interfere with Gmail Contacts/Calendars sync?
5
I don't want to carry all of my old contacts on my iPhone. How could I select which groups to sync with iCloud?
2
iPhone Contact Sync
6
Synchronize iBooks across multiple Macs running Mavericks
2
How to Sync iphone contacts to gmail
2
Sync contacts between 2 Apple IDs and multiple devices
1
Safari tabs sync on two macs and an iPhone does not work