my macbook battery drains within 1 to 2 hours

recently i noticed the battery doesn’t hold its charge very long. this may have been occurring for a while, but only recently did i pay close attention and actually timed it. the first thing i did is closed all my applications from adobe CS6, and with only internet browsers running (safari and chrome) the most time i get is 2 hours.

i talked with my technician and i went by his shop so he could check the battery. well, the battery is completely fine. of course, with the extra drainage, it may have aged its life cycle, but it still has more than 50% life left in it.

my technician suggested i keep an eye on the activity monitor when the fan gets going hard (which it always does) and the only thing showing high CPU usage is google chrome, which shows variable percentages from 20% to 65%, and then a whole bunch of little % — not sure if each refers to a page opened.

my technician said "get rid of chrome" but i really like using it (i used to run mostly safari until their last update but they changed some preferences and i hate what they took out so i switched to chrome).

so before i do so, is there anything else i should try?

To save some juice disable the Adobe Flash player, and only use it for stuff you actually want to see. From now on it will ask you to confirm and will not play all the garbage automatically. 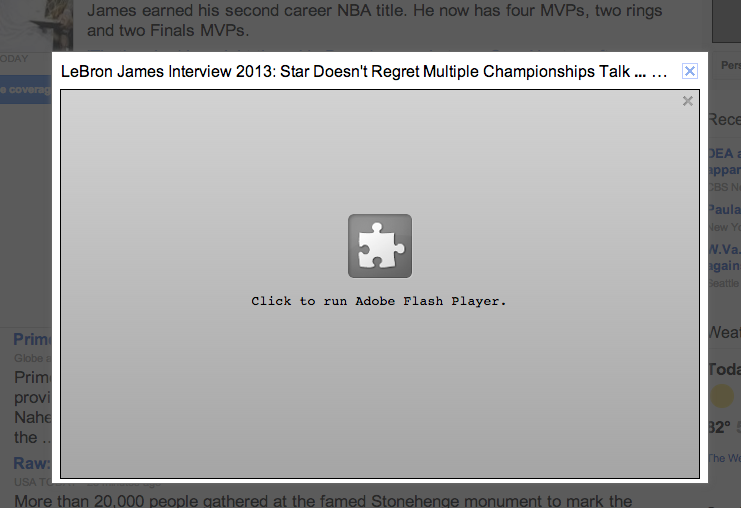 A huge battery drain is Flash (as Buscar mentioned), and although disabling it is one solution, it impedes too much functionality of the web. I would recommend Click to Flash, a free Safari extension. It disables flash, but can resume it on click (just like in Buscar's answer). However, it can also replace most online flash video players with a quicktime plug in, that uses many times less CPU. It's great for YouTube, which runs video's in an appallingly terrible player that easily uses over 1/4 of a dual core machine.

Make sure you don't have any legacy Adobe software installed. In particular the CS3 suite does NOT play nice with newer macbooks / OSX software.

I had this exact problem and had to use Adobe's CS3 uninstaller to get rid of Adobe Cue CS3 before my machine went back to normal.

Not the answer you're looking for? Browse other questions tagged macbook-pro google-chrome battery .