For a few days I'm noticing the fans spinning wildly and the CPU temperature is around 65C.. I'm only doing normal browsing and the fans are at 6000RPM. Quite strange.

I have MacBook Pro mid 2010 model. I have tried to reset the SMC by holding shift+ctrl+alt+power.

It happens in OSX and in Win7 (Bootcamp).

The outside temperature in the past few days is around 33C which is a lot more than usual (summer is here:).. but still it's weird because this could only affect Mac running a bit hotter and not fan speeds being higher at some given temperature.

Sensor being faulty or fan being clogged up also can't be a reason.. only thing I see that could cause this is some fault in the controlling logic but SMC reset should have taken care of this...

Any ideas? Hmm now when the computer is completely idle the temperature shows 63C and the fans are at 3500RPM - so only a small temperature difference and 2500RPM difference in fan speed... :S The whole thing is strange.

If you are confident with opening the case of your machine and blowing some canned air at it, this is said to take care of the dust accumulation that can cause overheating. Certainly no harm in it.

While I'm not sure why this may be happening, I have a solution: smcFanControl. It's a little program that sits in your menu bar and lets you directly control the fan speed. OS X will override it when your machine gets too hot, so there's no danger in setting the speed to the minimum.

I also have a mid-2010 Macbook Pro and have been running the program since I got it. 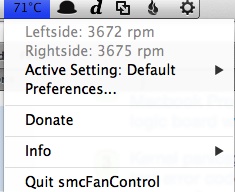 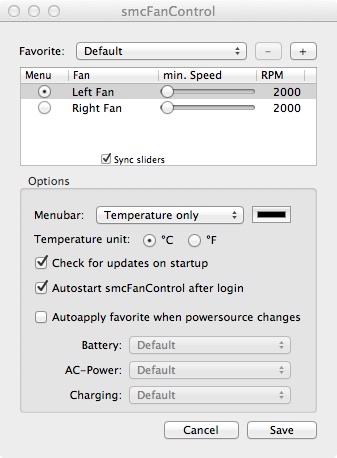 Not the answer you're looking for? Browse other questions tagged macbook-pro hardware cpu temperature .

2
6000RPM all the time with no activity - restart helped
2
The fans in my MacBook Pro (2007) run at full speed for no reason?
3
MacBook Pro fan is not running on default settings regardless of how hot it gets
1
High CPU and GPU temperature, high fan speed, low activity
0
Is it normal for a MacBook Pro to run so hot?