There are 2 Thunderbolt ports, but I have 3 devices. Is there a way to attach all 3?

I've read stuff about "daisy-chaining" but I don't know what it means.

Daisy chaining is connecting multiple devices in series, as in this diagram: 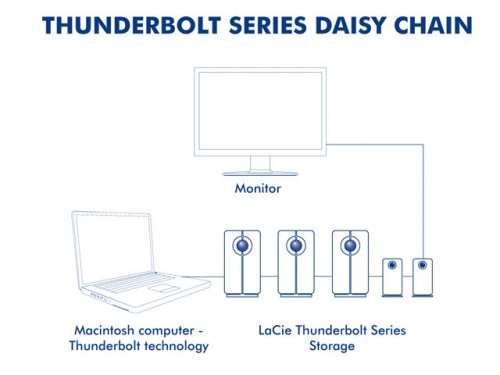 Note that this shows some disk drives, but they could be any Thunderbolt devices.

Each device in the chain (except for the last) needs two Thunderbolt ports — one to connect to the downstream devices (those closer in the chain to the Mac) and one for the upstream (to pass the data on to the devices further along the chain).

Additionally, each chain supports a maximum of six devices, and there can only be one non-Thunderbolt display, and it must be at the end of the chain.

Because of these limitations, you won't be able to connect the devices you have using Thunderbolt alone. Unfortunately Apple's ethernet adapter doesn't have multiple ports for passthrough, so you can only use it at the end of a chain. If your displays were Thunderbolt based, it would be do-able, but it sounds like they're not.

The best suggestion I can give you is to use the HDMI port on your Retina MBP to connect one of your monitors (this will work if it has either a DVI or HDMI input), however this limits the resolution to 1920x1200, so for hi-res panels (like those found on some 27" and 30" displays), you won't be getting the full benefit of the display.

If you're still stuck, there are USB 3 ethernet adapters available now that will do full gigabit. There might be a bit more overhead than the Thunderbolt adapter, but it's better than nothing.

Not the answer you're looking for? Browse other questions tagged macbook-pro thunderbolt daisy-chaining .