Recall: At the end of May, Apple introduced a lower-cost iPod Touch (5th generation, mid 2013) with just 16GB of storage, in one color (silver), no hand-strap, and no iSight rear-facing camera – but the front FaceTime camera remains. So:

I'm asking because this is the first iOS device that has only a front-facing camera, and I'm not sure if it is for FaceTime only, or if the camera can still be used for stills and video (facing the user's direction, of course.) Thanks!

With iPod touch, you can take both still photos and videos, using the FaceTime camera on the front or the camera on the back (available on some models).

There's also an accompanying image showing the built-in Camera app's user interface, and notes indicating controls for the flash and to "Switch between cameras" may not be available on some models: 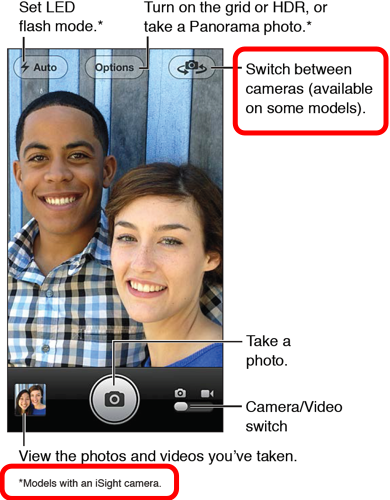 Finally, I've also learned that third-party apps that use cameras on iOS devices should continue to function provided they use the iOS APIs correctly — as demonstrated in Apple sample code — to query the device for camera capability and the available cameras. (When a third-party app assumes a rear-facing camera is always available on a camera-supporting device, such an app won't necessarily operate correctly on the iPod touch 5th gen 16GB.)

Not the answer you're looking for? Browse other questions tagged applications ipod-touch camera .

10
How much RAM does the 4th Gen iPod Touch have?
1
why doesn't my 4th gen ipod have the camera app anymore?
4
Why games claimed to be compatible with 3rd Gen iPod won't run on my 3rd Gen iPod 8GB?
5
App compatibility for first gen iPod touch
0
Why doesn't my iPod touch (5th Gen) have FaceTime?
2
Does the iPod Touch 5th Generation have a magnetometer sensor?
2
Which generation is my iPod touch?
2
Can iPod touch 5th gen use older versions of apps?
1
The camera lens on iPod touch 5th gen
3
iTunes says I have more photos than I really do