I'm using Word for Mac 2011. When using the default font - Cambria - extra spaces appear when I type an apostrophe followed by another character. See the screenshot at: 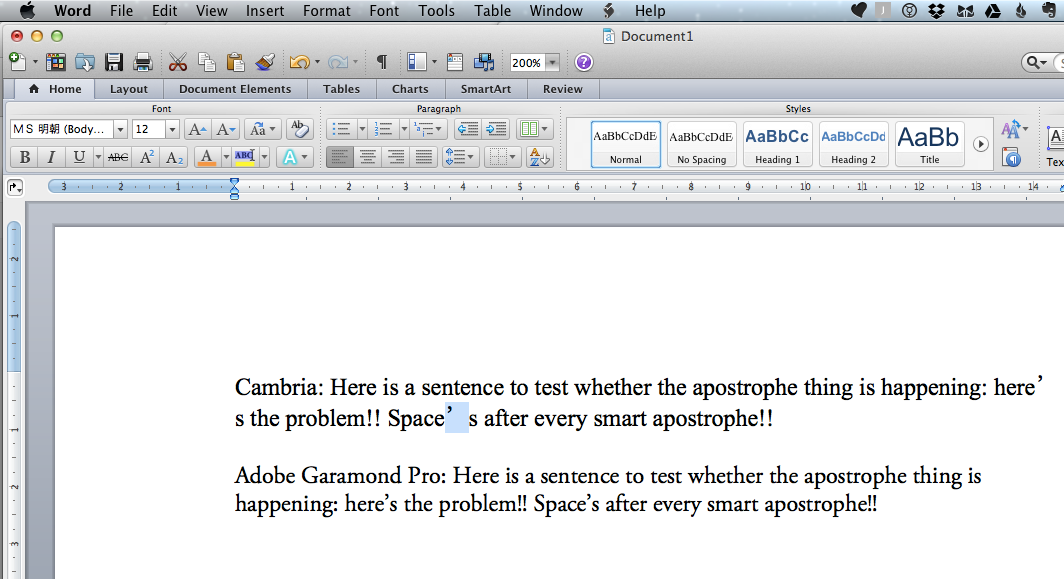 As you can see in the screenshot, the font for the apostrophe character (which includes a big space after it) isn't actually Cambria; instead, it's

It seems that Cambria automatically uses this font for apostrophes, and that the apostrophe character for this font includes the extra space.

How should I go about fixing this so that apostrophes appear correctly? I'm guessing it might be some kind of font conflict, but I'm not sure: and I don't know how to fix font conflicts, in any case.

After updating OS X to 10.9 and opening Word for the first time since the update I encountered the same problem. I spent half a day testing all the suggestions put forward here and in other forums responding to the same query (including checking autoformat preferences/searching for font duplicates/verifying fonts/testing in new mac user account/repairing permissions etc.) with no luck.

Finally, I deleted the Cambria font from the Font Book and reinstalled again. I reopened Word and tested and the problem seems to have disappeared.

Normally you would not expect this kind of thing (font substitution) to happen unless your default font had no character for the Unicode curly apostrophe. Is it possible you have an old, non-Unicode (e.g. Postscript) version of your font installed that is being used by mistake?

PS I have found a reference to this same problem in the MS Forums from 2011. Perhaps it will help:

Is your OSX Language & Text setting set to something other than English? (I'm guessing that it IS set to English, based on your screenshot.)

It's possible that Word's default language is not set to English (US) (or your English-speaking country of choice). Ensure that it is set to the correct language by opening any document in Word, then go to Tools/Language, select English (US) (or whichever English variant is appropriate), then click the "Default" button and verify the change to the Normal.dot template. Then, create a new document and type text that includes an apostrophe, and report back on the result.

Two options for the unsophisticated that worked for me:

I did not have any luck with adding all the word fonts to font book or with changing the proofing language.

I solved the problem by: home menu -typography --tick the box saying AV with an arrow above and an arrow below, pointing in different directions (switch on kerning).

I don't know what other problems this might cause elsewhere in my document, as Word is a mystery at best.

I've seen this problem and the cause turned out to be that Cambria was simply turned off in FontBook. I fixed it by highlighting all the fonts in FontBook, enabling them and then resolving any duplicates it caused.

Not the answer you're looking for? Browse other questions tagged macos ms-office font .

7
Curve text in Microsoft Word for Mac 2011
0
In Apple Pages, how can I disable italic swashes?
6
How to remove color formatting of links in Microsoft Word?
2
Equation Options on Word 2011 for Mac
1
Outlook 2011 reports incorrect font size
0
Font rendering issue with Word 2011 and 3rd party font (Admiration Pains)
0
How to include a tab in an Excel for Mac cell - Mac equivalent of char(9)
6
What character is this possessive apostrophe: ’
4
Remove picture compression for Word 2011 for Mac
1
Moving by word no longer working in Word for Mac 2011