Right around when I bought iPhone 5s for my wife and me I also moved in to a new, larger house. I was finding that wifi performance on our fancy new phones was terrible: I have a 35mbps internet connection but the performance was so bad that iCloud backups could rarely complete. The SpeedTest app would show that performance varied between 5mbps and 0mbps (no activity, just frozen). At first Apple replaced our iPhones, but that didn't help one bit.

Since then, I've learned a few things: 2.4GHz signals perform poorly on iPhones and moderate on other devices, wile 5GHz performs very well (30mpbs+) on all devices, though range is limited with the iPhone compared to my MBP.

In order to compensate for this, I set my house up with two Airport Extremes connected via ethernet wired in the house: a 4th generation connected to my cable modem on one side of the house, and a 5th generation (hosting printer + disks) connected via ethernet broadcasting wifi on the other side of the house. I had hoped by doing this I could just use the 5GHz signal and the range issue would be addressed with my phones.

Surprisingly, I found performance to be incredibly spotty -- to the point that network activity would stop entirely until I turned wifi off/on on the phone. On other devices, everything was fine. Debugging this further, what I discovered is that my 5th generation AE basically freezes up wifi traffic on my iPhones after a certain amount of traffic and it never recovers. I confirmed this by sending a separate wifi signal from that base station and connecting directly to it. Sure enough, SpeedTest clearly shows the weird behavior.

So far, the results are consistent no matter what: my 5th generation AE seems to simply lock up when sending data through my iPhones. One strange thing I can't find answers on, and my gut says is part of the problem, is what exactly "data rate" means when looking at connected clients. For my laptops, it's always very high (150Mbps) but for my iDevices & AppleTV, it can range between 1Mbps (usually) and sometimes as high as 60Mbps. I can't find any documentation on what this really means, but I am assuming it's not a coincidence that higher numbers equal better performance

Does anyone have any tips on what to do here? I'm past my Apple Customer Care period for all my AEs and iPhones, but I'm glad to pay $20 for a one time ticket if it'll help. Is it possible my 5th gen AE is just broken? Has anyone else had 5th gen AE + iPhone 5 wifi issues?

PS: I'm attaching a screenshot from my iPhone showing the weird behavior on my 5th gen AE. This does not happen on the 4th gen and I would just use that if it weren't for the unexpected range and 2.4GHz performance issues I'm also seeing.

PPS: The wildcard in this whole thing may be interferrence. I have read that sattelite dishes can sometimes cause problems (we have DirecTV). Our house is not in a dense urban area, but we are on a hill and not too far away (half mile?) are quite a few major broadcast towers for the Portland TV (and radio?) markets. 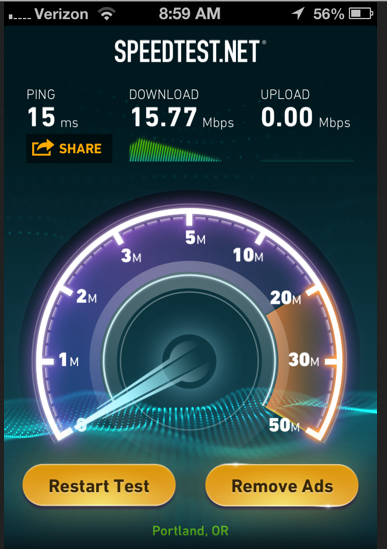 To understand signal vs noise, and how to interpret those numbers, see very useful guide, Airport Optimal Base Station Placement.

Not the answer you're looking for? Browse other questions tagged wifi airport performance iphone .

7
MacBook as WiFi extender
35
How to enable faster WiFi Roaming with Mac OS X & Airport base stations
30
How can I tell which band (2.4GHz or 5GHz) my iPhone's WiFi connection is on?
2
iPhone wifi is half the speed of Mac when using an Airport Express
1
Force Airport Express to join 5GHz network
0
Resolving WiFi interference 2.4GHz/5GHz
3
How is my 2nd Airport Extreme Connecting To My 1st Airport Extreme?
2
Adding airport extreme to existing network breaks wifi