What is causing the high system CPU load under Mountain Lion?

I recently began to see some odd behavior on my MacBook Pro on Mountain Lion. I noticed the fans coming up and applications behaving sluggish. I checked the ActivityMonitor (see below) and the results kept me puzzled: Although I list all processes, only very few show up that cause medium CPU usage, still the system CPU is at close to 70%.

I've wondered about this behavior quite a while ago already and then - just as now - the problem just went away after about 10-15 minutes of lagging and fanning.

What can cause these symptoms? Why isn't the "thing" causing the CPU load showing up in the process list? How can I diagnose the issue in more detail?

UPDATE: I seem to could have hunted it down to Skype causing the trouble. I've notice it running on 100% CPU and quit it. Now it seems to hang in some kind of error state according to ps. Unfortunately I cannot kill it :(. 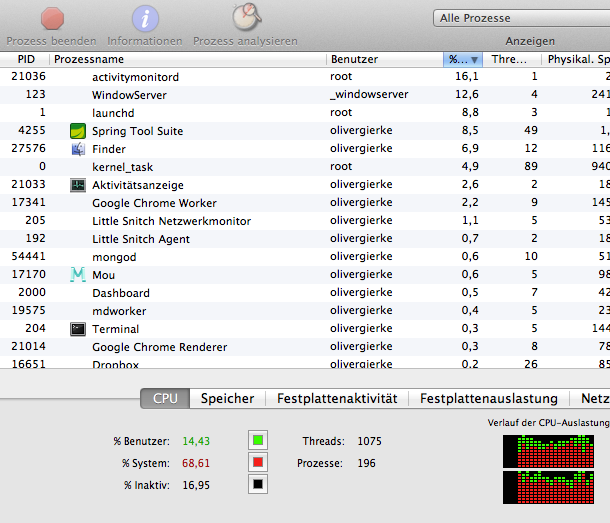 Try opening a terminal and type

The CPU time there is cumulated time spent executing, but maybe a process will show with an all time cpu use that sticks out somehow.

There also seems to be an answer to a similar question here which suggests Intel Turbo Boost may be the culprit.

I've encountered this problem too.

won't reveal anything useful, and neither will disabling a core using the System Preferences "Processor" pane - it just makes the "system" take up around 80% instead of 55%.

I had a Intel Core 2 (Penryn) Processor, which I didn't see listed on that page, but when I dual-booted Ubuntu I could control processor throttling, so it's possible that's the issue. However, when the phenomenon occurred, my macbook's temperature went up excessively, as did the fans. That's not predicted by the "throttling" hypothesis, since presumably that would decrease energy use, so there's something else going on here.

It always went away after a little while (10 to 15 minutes), but something about the problem made the hairs on the back of my neck stand up, so I looked after a more permanent solution. I had a friend take a look, and he mentioned Count Foraii, so I did some more research (and talked with a few, shall we say, contacts), then covered my laptop in salt and set it on fire.

It hasn't done it again since.

When your cpu is overheating system throttle it's frequency and voltages to cool it down, so this can explain lagging and fanning for a some amount of time and then returning to normal.

Not the answer you're looking for? Browse other questions tagged macos macbook-pro cpu .