How to prevent Terminal from resizing when font size is changed

Terminal resizes the entire window in seemingly unpredictable ways whenever I change the size of the font -- a frequent operation when frequently going between laptop and external displays.

Is there some way to prevent this? iTerm seems to do the same thing.

Update: Based on @robmathers' answer below, it seems likely that what I want isn't possible. Can anyone recommend any OS X terminal emulators that don't have this feature?

As far as I know, you can't do this in Terminal (I don't use iTerm, so I can't speak to that). The reason is that Terminal's window sizes are defined by characters, rather than pixels. Hence, when you change fonts, the window resizes based on the proportions of that font, so as to preserve the format of the existing content on the screen.

It sounds a bit silly at first, but given that a terminal simply displays only text characters, it makes sense — if a window is sized by pixels, you'd often end up with wasted space when the size of the window doesn't exactly match a character boundary.

Old question here ... but thought I'd add that this has been supported in iTerm for almost two years now https://gitlab.com/gnachman/iterm2/issues/2900

Just uncheck the "Adjust window when changing font size" box in the preferences. 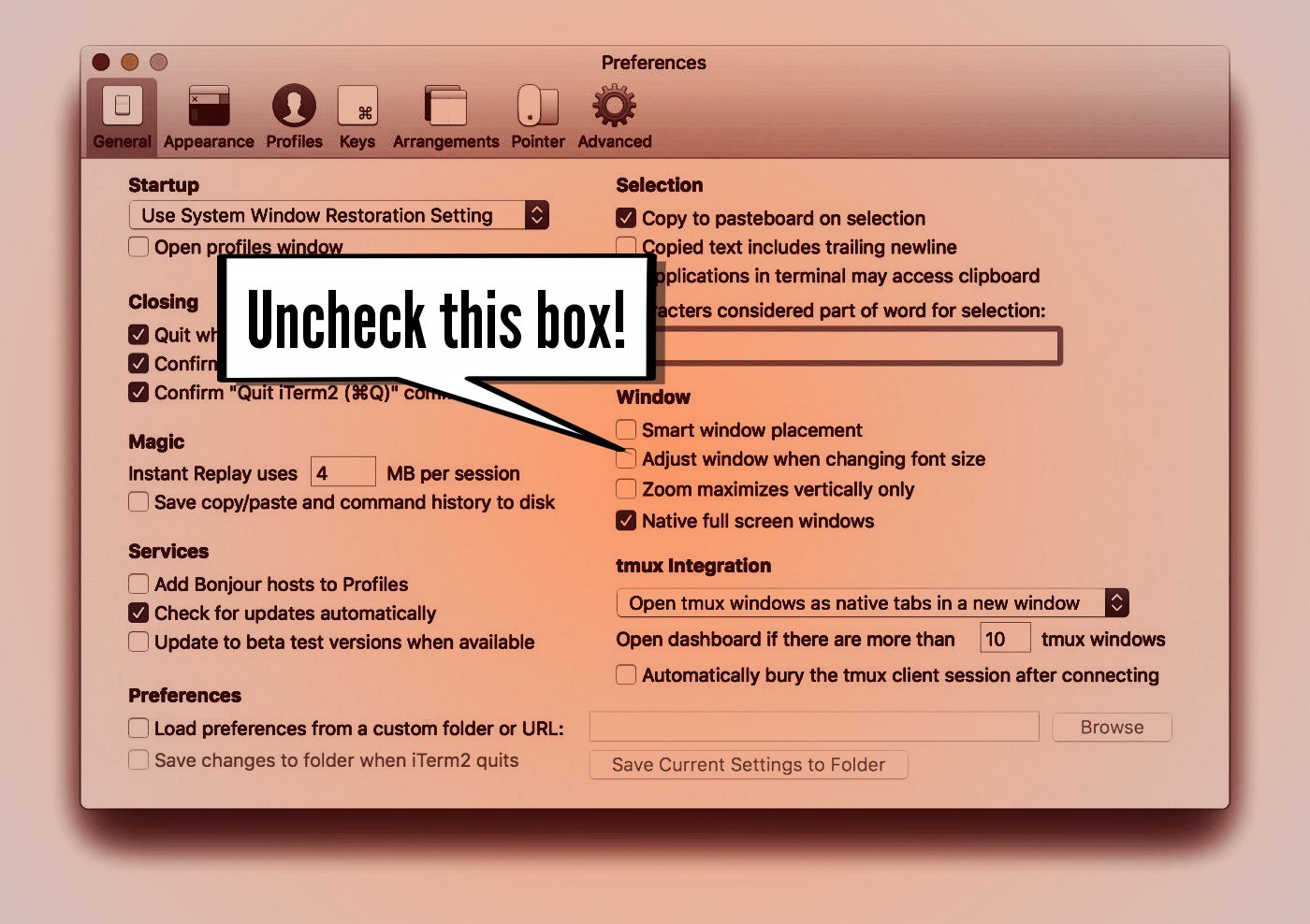 The box is now here:

Based on your update to the question, have a look at the ZOC Terminal. It it is commercial, can be used for local shells and also SSH and other connections, but offers tabbed sessions and the ability to control what happens when the window is resized (for example the there is a choice to retain the the rows/columns and instead shrink/grow font size, etc.). Have a look at it's Session-Profile>Layout settings page.

I have had this same issue for years. I recently found not a solution but a workaround for OS X, which does not require you to change terminal emulators. It uses an application called Spectacle: https://www.spectacleapp.com/

Spectacle provides keyboard shortcuts for positioning and resizing windows (but not the fontsize, as far as I can tell). When I want to change the size of my font, I issue the default command to do so, which creates the unwanted re-sizing of the window. I then reduce or increase the size of the window using the Spectacle keyboard shortcut, until I get it back to a preferred size.

1
How to keep PS1 changed in terminal?
1
Problems with resizing terminal
5
How to permamently change terminal font size via commandline/terminal?
1
Terminal prompt changed
5
Prevent Mac terminal brightening font color with no background
6
How to prevent Terminal window from changing its size after opening and closing tab
4
How to change font size and font for all profiles in terminal?
2
Prevent Mac terminal from changing tabs when reopened
1
Quickly change the font size in Terminal