Is it possible to change the name of a bluetooth mouse?

I bring my MacBook Pro back and forth between home and work. I have a Magic Mouse in both places. I guess because they are both the same model, I have to re-pair the mouse with the computer every time I go back and forth. They have very similar names so I'd like to rename them something like "Work mouse" and "House mouse". So far I haven't found a way. Is it possible?

bluetooth system-prefs mouse
Share
Improve this question
asked May 22 '13 at 16:48

You can do so in System Preferences. Open the Bluetooth panel, select your Magic Mouse and click the cog wheel at the bottom to select "Rename" from the context menu.

This option will only be available if the mouse is not plugged in. 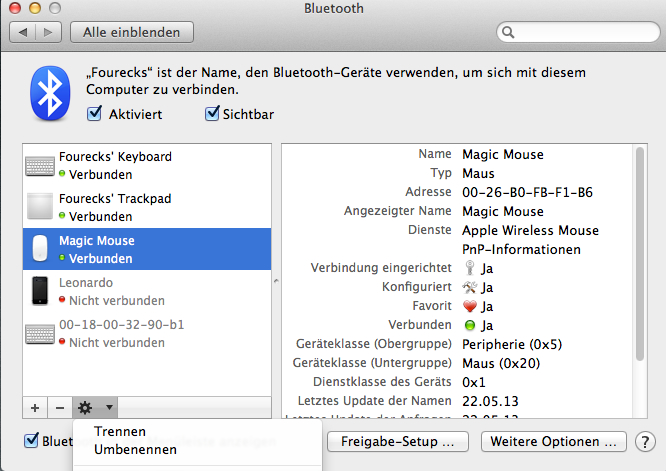 With the new update, you may not find the cog wheel, so instead you can go into bluetooth settings and right-click (click with two fingers) the device you wish to rename. 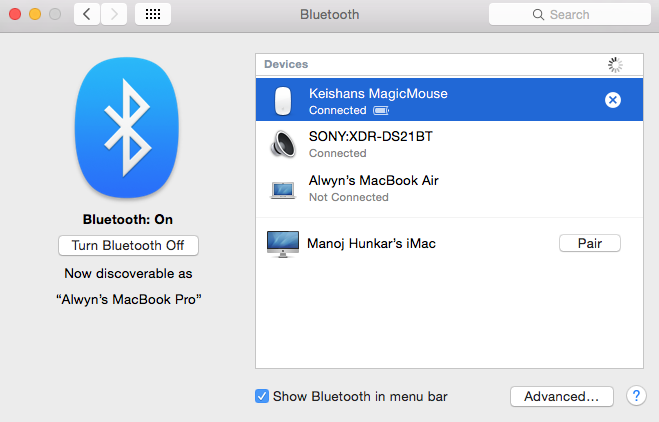 It should come up with a context menu. 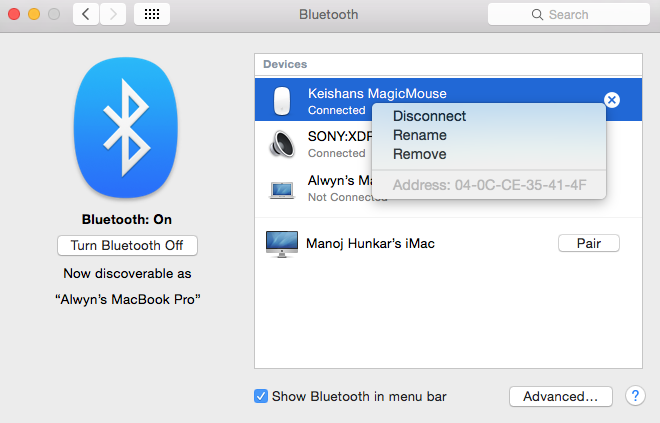 Select Rename, which will open a window where you can rename your mouse to anything you like. 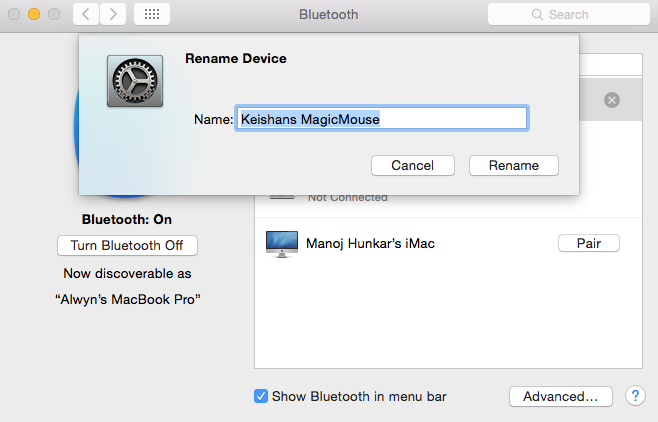 In addition to other answers that indicate to use a secondary click on the device shown in the Bluetooth menu, also note that this is not possible while the device is connected with the cable.

I obtained a new Magic Mouse and connected it using the cable to my computer running macOS 10.14.3. The device was recognized and a system dialog informed me that "$PreviousOwner's mouse" had been connected to my system over Bluetooth and was ready to use. Naturally I wished to rename it, but the contextual menu only contained the option "Remove". There was neither "Rename" nor "Disconnect".

After having removed the cable and reopened the Bluetooth menu, the contextual menu showed the two options that were previously missing, and I was able to proceed with the rename without further problems.

I later reconnected the cable and noted that the two options again disappeared.

I was having the same issue and noticed that the context menu was different when rename would fail:

I was able to get the full menu (with "Disconnect") and successfully rename the device by not using it while attempting to rename (I was using CTRL-Command to bring up the context menu).

Not the answer you're looking for? Browse other questions tagged bluetooth system-prefs mouse .

10
Is it possible to make a mouse accelerate like it did in Windows?
44
Sharing a Bluetooth Keyboard and Mouse sequentially between two Macs
3
Magic Mouse & Bluetooth Keyboard Won't Pair in Lion
2
How can I use different magic mouses at home and at work?
2
Wi-Fi Interfering with Bluetooth Mouse
1
Pair a bluetooth mouse with the keyboard only