I thought it was NOT possible to use the USB hard disk attached to the Airport Extreme Base Station (AEBS) as a backup destination for Time Machine backups. This was mostly due to Google results as well as this Apple article.

I did the following (no hacks, nothing, just straight up!)

I went ahead and picked it and the backup is running just fine (images below).

EDIT: Well well, I didn't notice this before but TM seems to think it's backing to a Time Capsule! I don't recall doing anything special to either my Mac(s) or the AEBS. The AEBS was recently upgraded to the latest firmware (7.6.3 or 76300.7 it toggles when the version is clicked) 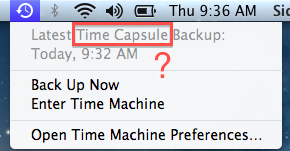 For a second confirmation, I went to my other mac (also Mountain Lion) and the same result - TM allowed me to choose that AirDisk for backup. Interestingly two separate sparse bundles were created on the on the AEBS Time Machine AirDisk volume, one for each Mac's TM backup instead of trying to cram both into a single sparse bundle. Not sure if that was because I enabled encryption (which I did) on the TM backups.

Question: Is the [AEBS + USB/AirDisk + Time Machine] combo finally, officially supported? On Mountain Lion or something? I couldn't find documentation along those lines but since we're talking about backups, I just want to make sure I'm not following an unsupported mechanism. 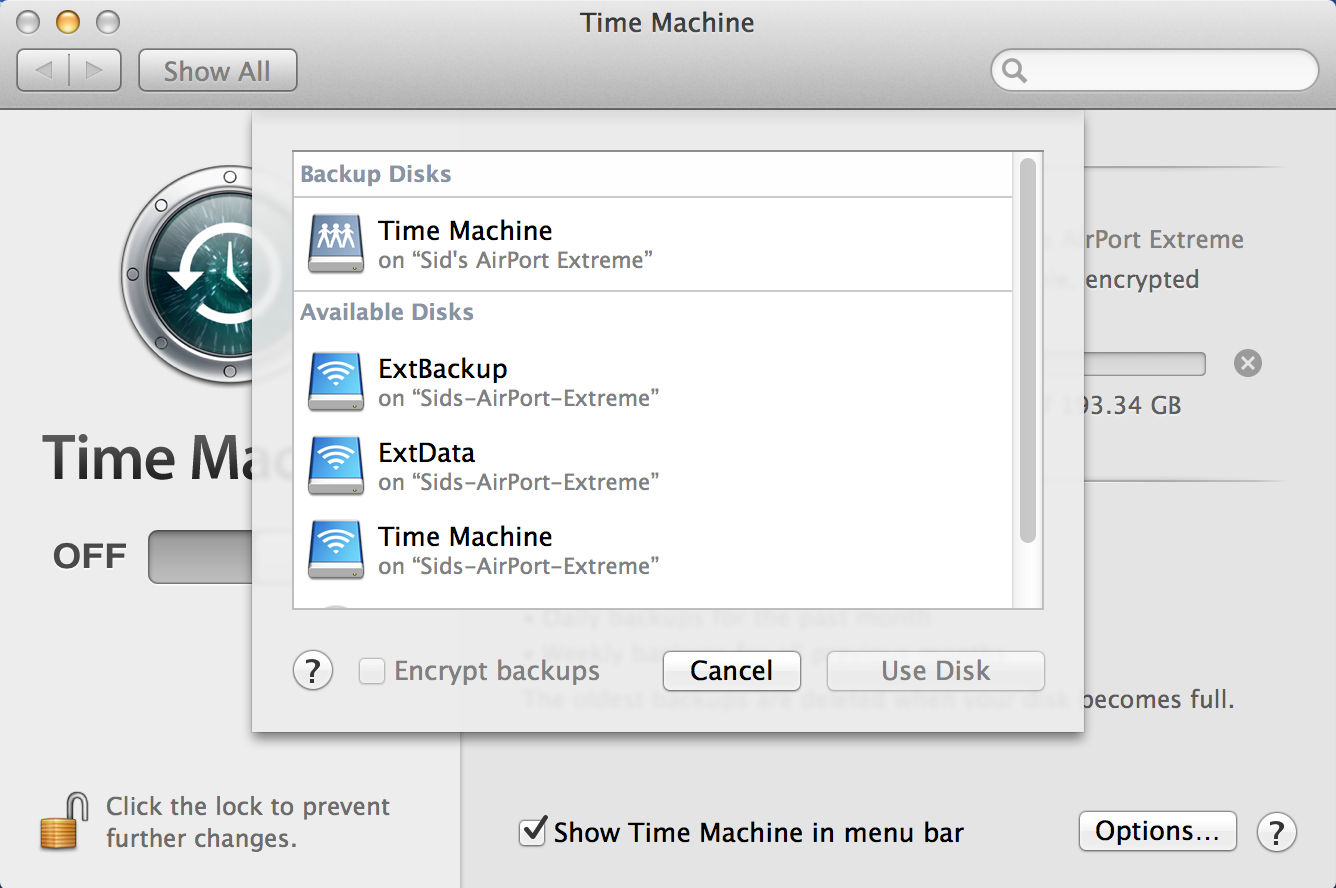 And the actual backup itself progressing: 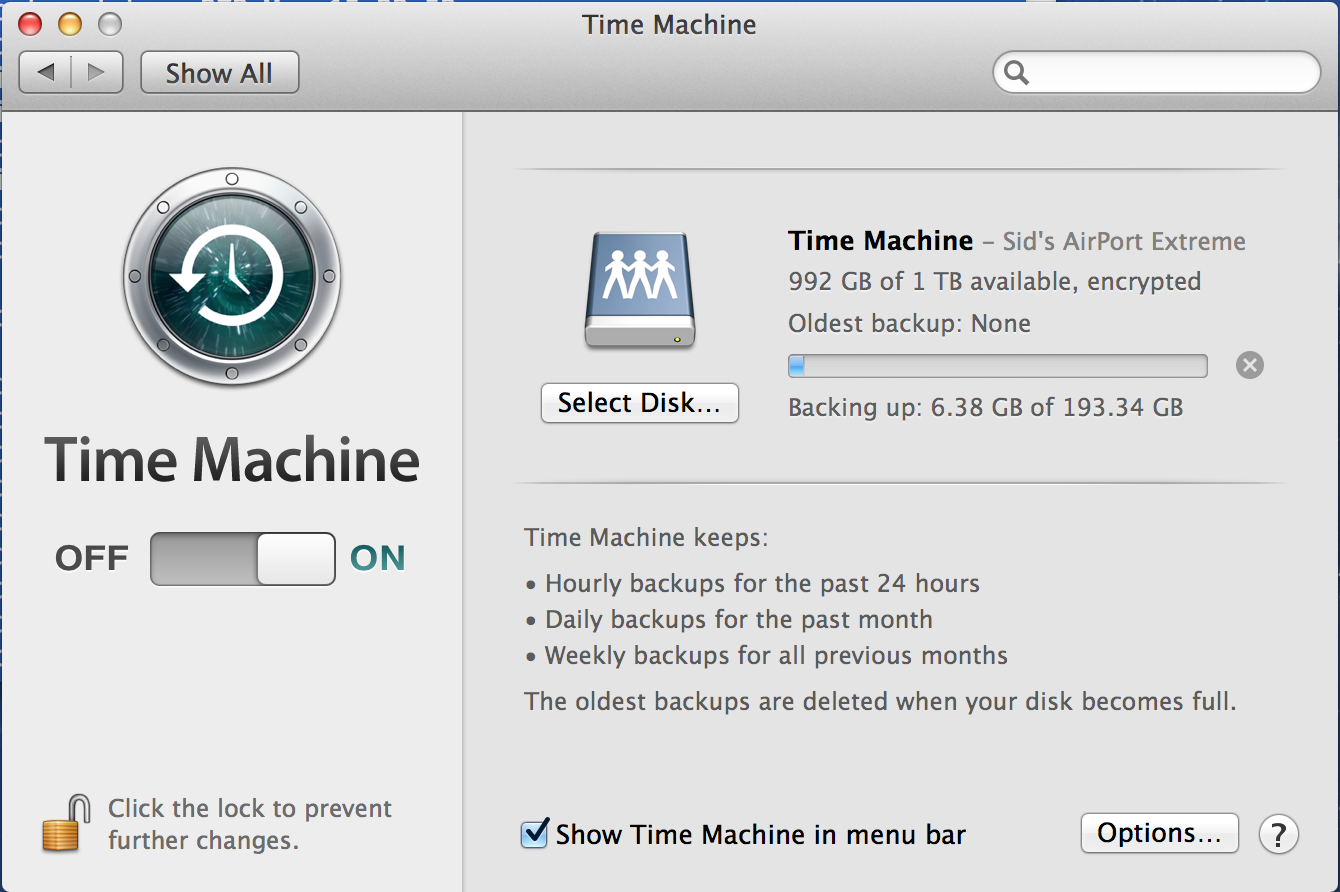 Question: Is the [AEBS + USB/AirDisk + Time Machine] combo finally, officially supported? On Mountain Lion or something? I couldn't find documentation along those lines but since we're talking about backups, I just want to make sure I'm not following an unsupported mechanism.

It was not supported as of Mountain Lion (see OS X Mountain Lion: Disks you can use with Time Machine) but according to the newest KB article (Use Time Machine to back up or restore your Mac) it is now officially supported:

Time Machine is the built-in backup feature of your Mac. To use it, you need an external storage solution, sold separately:

I couldn't find any information about whether this functionality was added as an Airport Express firmware update or was introduced with a specific OS version (or both), and thus I can't provide a firmware/OS version support matrix, but from Backup disks you can use with Time Machine the minimum requirements seem to be:

Absolutely sterling work! I had partitioned my external usb HDD with two partitions, one parition HFS+ for my Time Machine Backups, the other as fat32 (originally formatted ExFAT which I didn't know wouldn't work with usb attached hdd's on Airport Extreme either, PITA) for network storage for either Mac or Windows machines.

Couldn't believe when I went to select my new usb HDD connected to my Airport Extreme to use as my Time Machine destination that it wasn't an available option.

Read a few articles then on the apple support site confirming it's only supported on the new tower type Airport Extremes. Totally crazy as the flat Airport Extreme that I have is obviously more than capable if the feature is allowed. Apple need to get back to including functionality that people want and use like they used to in the good old apple days, instead of alienating their users by needlessly segregating devices which can and can't have a feature, despite both devices being capable.

Anyway, I just wanted to thank you for your solution and the time and effort you obviously took to post your fine work around. It's guys like you that make the internet and computers fun, the way it should be, like it was back in the good old.... : ) well, you know what I mean.

I would really love to hear some feedback from you as to how it has been working out for you since you tried this too as it's been five or six months since you posted this, just in case there are any pitfalls I need to be aware of going forward.

Not the answer you're looking for? Browse other questions tagged macos time-machine backup airport .

1
Any ideas why my Airport Extreme identifies itself as a Time Capsule in Time Machine?