How to get iTunes 11 to Group by Album Name

tl;dr Is there an easier way / hack to get iTunes to display albums by album name? Currently it splits albums up by artist, then sorts the album names A-Z. Going through and manually changing the Album Artist will take way to long...

I recently upgraded to iTunes 11 and for the most part I like it. However one issue I have come across (and it would seem many others are in the same boat) is that iTunes is grouping albums by artists. For the most part this is fine, but when it comes to soundtracks and compilations things get hairy... 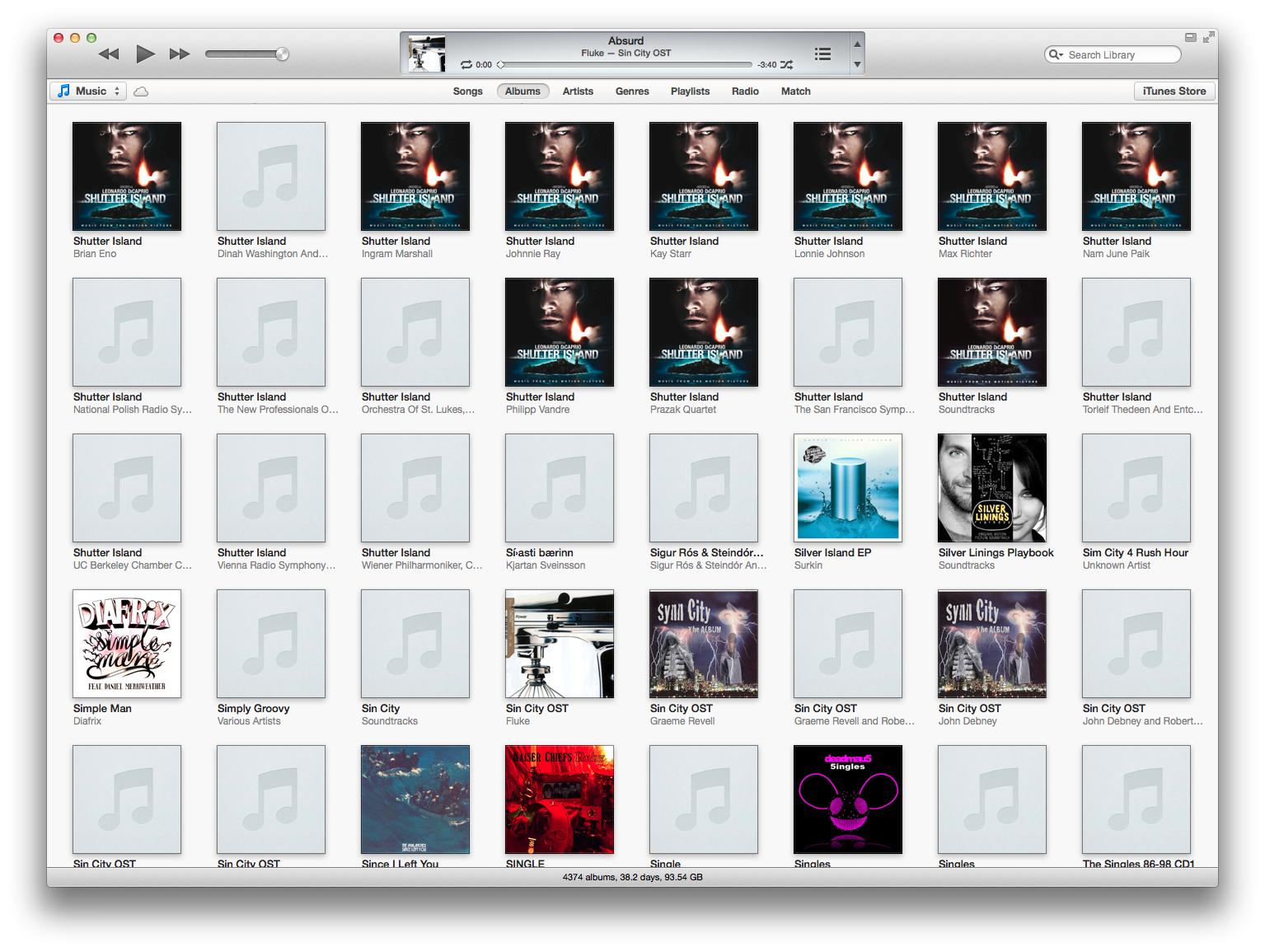 As you can see soundtracks for games or movies (eg the Shutter Island or Sin City soundtrack) is a compilation of different songs by various artists and iTunes is displaying albums in A-Z order but grouping them by Artist...

I've found that you need to set the 'album artist' to something like Soundtrack or Various Artists to get the grouping to work correctly. However this would take hours to do manually!!

Is there an easy fix for this behavious? Either by automating the Album Artist or by hacking iTunes to display albums grouped by album name?

In general, you're already using the correct way to sort by album name. Click "Music" then, "Albums"

The problem you're seeing with compilations being shown multiple times for each artist has always been a problem even in older versions of iTunes. In order to fix this, you'll need to modify the Album Artist field in the track info.

To do this, press ⌘+i (Ctrl+i on Windows), then put “VA” into the Album Artist field (Note: using “Various Artists” or any matching string should also work). You can select multiple tracks with ⌘+Click (Ctrl+Click on Windows) to edit many tracks on the same compilation at a time. 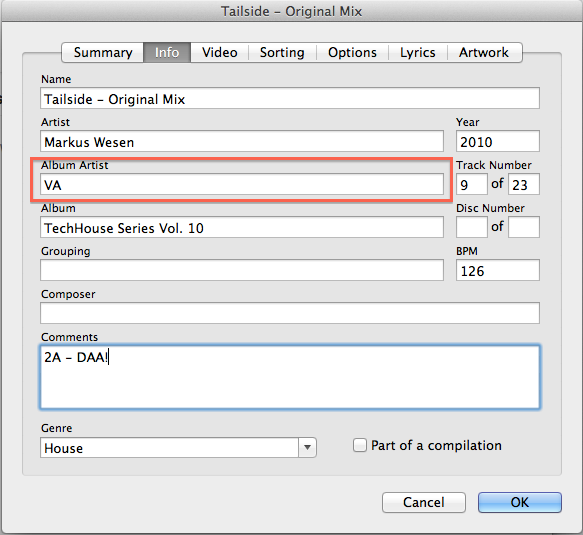 Have you checked the Compilation tag for these albums? Find all the tracks for an album, select them, and press Command-I. Click on the Options tab, then, next to Part of a Complication, select Yes. Click OK.

TrinitronX posted a very good answer (similar to Joop's). I'll TrinironX's answer one step further. Don't just put "VA" in the Album Artist field! In fact, if you follow Kirk's answer and set the Compilation flag, all of your compilations automatically get grouped together anyway (at least in previous iTunes revs). In TrinitronX's approach they get grouped together under "VA" (or just "Various", in the default iTunes approach).

For your Album view, this will also keep the whole Album together, instead of breaking it apart for each combination of "Artist + Album". It looks like individual tracks showing up as albums in your screenshot, but I bet if you had the exact same artist on 2 tracks on 1 of those albumns, they would get grouped together like those 2 tracks are an album.

Here are my observations: For albums that are a bunch of songs by different people:

To group by Album Name, select View > View Options... from the menu bar:

This will present a panel with a drop-down list of available sorting criteria. Select Title to sort all your albums by Album Name:

I don't know about any hacks for this (you probably could use AppleScript, but I'm not sure). However, I do know of two ways to do this:

Only Elegent way to get over it is to change the Album Artist. Quick way of doing this is to go into album view, quicksort by various means to get those in front. You mention that soundtracks and compilations are mostly to blame. Use those as your 1st searches.

Then Cmd click and of the albums or that are obviously by Various Artists, cmd-I will allow you to change bunches of them at the same time.

Even with a huge library this will be quicker than finding some script that screws uo all kinds of other things.

Hey guys I think the current iTunes is better than ever before and the issue above can be easily sorted out. Try the following when you have a compilation file that you need to view as one album.

Not the answer you're looking for? Browse other questions tagged itunes library-management .

7
Sorting by multiple criteria in iTunes
5
Can I set custom album artwork that isn't included in one of the songs?
0
Changing artist name on itunes without changing to unknown album
7
View individual artists in compilation albums?
0
How can I make soundtracks with one artist sort as soundtracks in iTunes (and iPhone)?
2
How do I get music labeled under “various artists” to appear under the artist themselves?
2
iTunes Match mismatch between OS X and iOS
2
How to ungroup compilations on iPhone Music?
0
How to play all songs I own by an artist in itunes?
1
Copy “Artist” into “Album Artist” in iTunes?