I want to return their phone, but can't access their contacts, etc.

1) Find the phone number, then find the owner

I think the iPhone is locked but not the SIM card. If this is the case, pop the SIM card out. Put it in another phone. Find the number. Now, use the web to do a reverse lookup, find them, find their email or alternate phone, and call them.

2) Find someone who knows the owner

When you set the password, by default the "Voice Dial" is still active. Try holding down the home button for 4 seconds. Even when locked, you might be able to say "Call so-and-so". Try some random names. If someone picks up, explain the situation. They will probably have an alternate means of contacting the owner.

3) Turn the phone on and see if there are recent callers - then use any of these names to try voice calling as in 2 above.

By strange coincidence, this exact thing happened to me, so I have the answer:

Wait until the owner's mother calls. Answer the phone, explain the situation, upon which she will send her husband to collect the phone from your office.* Shake the father's hand, hand over the phone, and make a funny apple joke (he asked me if I had kids, to-whit I responded, no, but I have an iPhone, so I understand! -- fan boys rejoice).

Take it to the Apple store and see if they can sort it out. I would imagine that they have DB of serial numbers and customers even if they didn't sign up with Applecare or MobileMe.

Just ask Siri 'what is my name' and it will bring up the contact details for the owner of the phone.

To be fair, upon closer inspection, this seems like a huge gap in the security of an iPhone where you're data isn't actually secure, even when locked. Love it!

Obviously only works if the owner has set their phone to utilise Siri when locked. But I think most people do.

If there is a lost and found at the location you found the phone put it there, or turn it over to the police. That is where the person who lost it should be looking for it.

Attempting to break the PIN is just not a good idea, even if you have good intentions. They chose to keep some information confidential (for whatever reason), at the expense of making the phone harder to return if it is lost.

I hope you make the owner very happy.

Starting with iOS 6, owners will be able to help you out by sending a number to the phone using the new "Lost" mode:

IOS 6 and iCloud now offer Lost mode, making it even easier to use Find My iPhone to locate and protect a missing device.6 Immediately lock your missing iPhone with a four-digit passcode and send it a message displaying a contact number. That way a good Samaritan can call you from your Lock screen without accessing the rest of the information on your iPhone. And while in Lost mode, your device will keep track of where it’s been and report back to you any time you check in with the Find My iPhone app.

You can try a number of things. To build on mankoff's answer:

1)Try taking out the SIM card and checking if there are any contacts on it. If the iPhone was not the first phone used with that SIM, it may have stored contacts on it.

Also, I remember seeing this article a while back, I wonder if it still works with iPhone 4: Read iPhone Data with Ubuntu

Do you have a PIN code on your iPhone? Well, while that might protect you from someone making a call or fiddling with your apps, it doesn’t prevent access to your data … as long as the person doing the snooping around is using Ubuntu “Lucid Lynx” 10.04.

I uncovered a data protection vulnerability [9], which I could reproduce on 3 other non jail broken 3GS iPhones (MC 131B, MC132B) with different iPhone OS versions installed (3.1.3-7E18 modem firmware 05.12.01 and version 3.1.2 -7D11, modem 05.11.07) , all PIN code protected which means the vulnerability bypasses authentication for various data where people most likely rely on data protection through encryption and do not expect that authentication is not in place.

This is what you get via an auto mount without any PIN request: 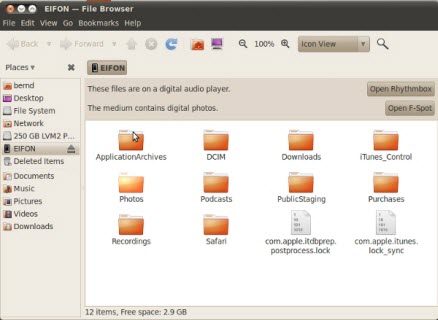 This data protection flaw exposes music, photos, videos, podcasts, voice recordings, Google safe browsing database, game contents… by in my opinion the quickest compromising read/write access discovered so far, without leaving any track record by the attacker. It’s about to imagine how many enterprises (e.g. Fortune 100) actually do rely on the expectation that their iPhone 3GS’s whole content is protected by encryption with an PIN code based authentication in place to unlock it.

This, quite honestly, is a staggering flaw. It basically allows anyone capable of driving a Linux PC to copy data off of an iPhone without the owner of the phone having any idea whatsoever that this has happened.

What’s more worrying is that Marienfeldt and Herbeck think that write access to the iPhone is only a buffer overflow away, which means serious access.

Lastly, an Apple store would have the serial number linked to an iPhone, as Philip Reagan suggested.

You can use Siri to call some of the contacts.

You probably know no names in his/her contacts list so you should ask Siri:

When you ask Siri about contacts, it would bring up ALL the contacts information that is entered in the iphone/icloud.

So if the iphone is connected to wifi/3g/4g and siri is enabled, you have access to the owner's identity(home, relative names, other phone numbers, addresses).

If the wifi and 3g is turned off, you would have some hard time dealing with it.

I'm trying a different tactic. I wrote a note telling them to call the phone or call my number and I took a picture of it with their phone. Hopefully it will upload to Photo Stream. It looks like 3G is on but I'm not sure if it will only upload over wifi. Oh, well. It's worth a shot...

Just wait for the owner to call once they realize they lost it. Just found an iPhone on the way home and as I was searching for 'How to find an owner of a locked iPhone', it rang. The owners wife, Viola'! Set up a meeting and hope someone will do the same for me someday.

plug the phone into iTunes to get data like the name or other identifiers!!

Not the answer you're looking for? Browse other questions tagged iphone password .

4
How to Add Gmail Contact via iPhone
4
How can I change my iCloud account on my iPhone?
0
how can i stop the thief from using my iPhone?
5
I've found an icloud locked iPhone, how can I return it to the owner?
0
Borrowing an iPhone 4 - I've swapped the sim but can I access my email and iMessages without loosing the owner's?
1
How to identify owner of lost iPhone?
0
WhatsApp notification on iPhone lock screen shows contact name instead of nickname
1
I lost my iPhone; how can I see my messages?
0
How to find lost Safari password on iPhone
12
How can I type the name of the person I'm calling on the dial pad and make the call?