Netboot Image - Where is the user generated data stored

I have a OS X Lion Server hosting netboot images. I also have a 10.8 Server for creating 10.8 images, but am hosting all images from one 10.7 NetBoot server.

When a client machine boots a specific net boot image, my understanding is that it copies at least the most necessary parts of the image via network and stores it somehow on its local resources.

Does it only store the data in the RAM or does it save data locally?

Where is newly generated session data stored? On the Server or locally ?

When NetBooting, there are three kinds of images, each with three different methods of mounting the DMG and storing the Shadow file:

In the case of Diskless Netboot (The most powerful), the Shadow file is stored in the NetBootClients0 folder of the Library/NetBoot folder on the server machine (Or NetBootClients1, NetBootClients2, etc, where the number matches the number of theNetBootSP` folder in which the Net Boot DMG resides)

To make a NetBoot image a Diskless Netboot Image, use the "Make this image available for Diskless booting" checkbox under the image settings in Server.app: 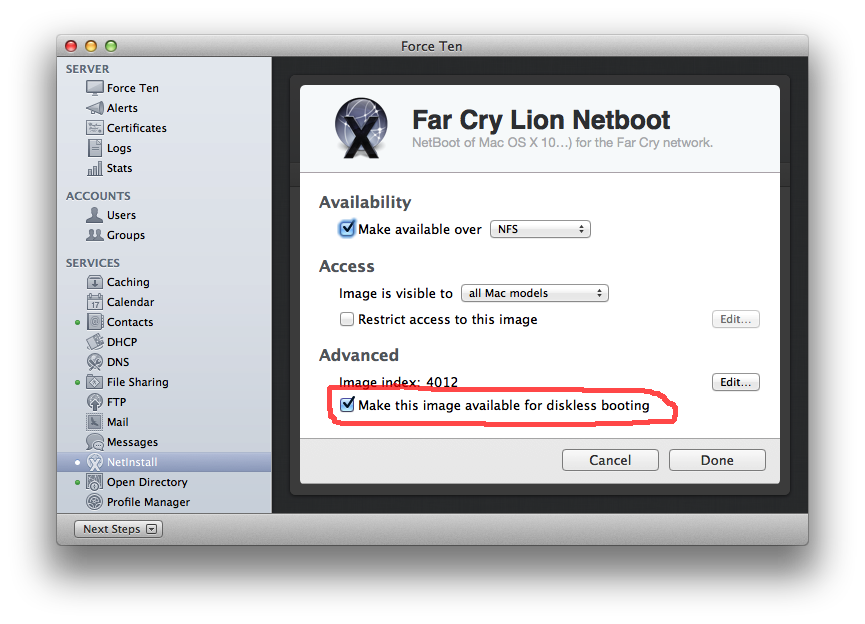 You also need to have AFP File Sharing enabled, and you need a guest writable sharepoint for the NetBoot directory. (I do not recall if Server.app creates this automatically) Apple has a document about troubleshooting Diskless NetBoot which is helpful. AFP548 also has some great hints

When a client machine boots a specific net boot image, my understanding is that it copies at least the most necessary parts of the image via network and stores it somehow on its local resources

This is not technically correct. When you NetBoot, the Mac OS X Kernel mounts the root filesystem (/, the boot volume) over the network. So nothing is stored locally. When data needs to be read (E.G. an application is launched) it is read over the network, rather than from your hard drive. No data is copied from the server to the local machine.

When changes are made, for example, a new file is saved, then the Mac OS X kernel needs to write those changes somewhere, and that's where the Shadow file comes in. As described above the Shadow file might be on the first local hard drive, but it might also be stored over the network. If it is stored over the network, then the Mac OS X client can actually unmount the drives and do things like running Disk Utility. It can even have the hard drives completely removed.

By default, the NetBoot image is a read-only asset, so each client downloads enough of the image to boot.

During boot, the OS Client makes a shadow file for local storage and changes.

Those changes can be re-used the next time that Mac boots from the network. If the shadow file gets deleted, the boot process will re-create it if needed.

This only will be of use for describing the initial boot assets and changes made to the core system. You will also want to think through how user changes are being mounted, stored, captured and backed up.

Netboot is great for troubleshooting and initial loading of an installer image. I've also seen it for loading a diagnostics suite or kiosk situations when you simply start up a single app where all the data on a server or cloud and no real data lies ever on the client (think museums or digital signage). I suppose a motivated team could engineer a total solution where all the Macs net boot, but it's usually better to let each Mac run it's own OS and have other methods to audit, control, re-image things when needed.

Not the answer you're looking for? Browse other questions tagged macos osx-server netboot .

2
Is there an easy way to update a NetBoot image?
13
Where are Photo Booth image files stored in Lion?
2
How can I administer my Lion Server from a Mountain Lion client
14
Where is the 'Where from' meta data stored when downloaded via Chrome?
2
Diskless NetBoot images served from a 10.8/10.9 server will not consistently boot
11
Where is clipboard data stored?
3
Where are system UI image files stored?
0
NetRestore not working on new MacBook Pro with Thunderbolt Ethernet adapter
2
Unable to create a NetBoot image on Sierra