Jumbled block instead of mouse pointer in login window

This jumbled block to the left of my login screen is my mouse pointer: 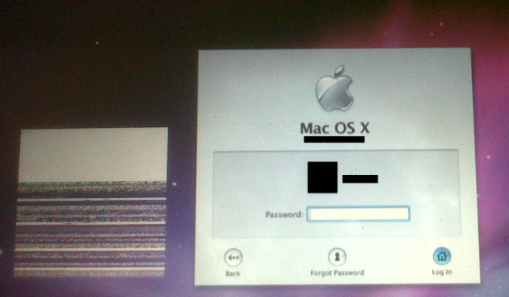 I'm having trouble determining what the cause could be. I'm not sure if it's the data display cable or the GPU but I'm hesitant to say that those are the causes because everything else displays just fine.

I was hoping somebody has seen this before because I'm a little stumped.

I've seen things similar to this, several years back, but never such a large jumbled block. I think it was never larger than about 4 times the size of the normal pointer

My guess would be it is not the data display cable. It's hard to imagine anything that could go wrong with a cable that would affect only the mouse pointer. I have zero experience with any Thunderbolt display, which might have enough 'intelligence' to do so.

I was usually able to figure out where the 'hot spot' of the pointer was. Even though the cursor image was jumbled, there was still a point somewhere in the jumble at which clicking the mouse registered in whatever was being pointed at. I would move the cursor to the corners of the screen, which gave me clues to where clicks would go. This might be more difficult with your quite large jumbled pointer.

I would suggest trying to get the computer to refresh the mouse pointer, to 'overwrite' the jumbled block and restore the little arrow. From the login window (as you have it pictured), pressing the return key or the enter key normally hides the arrow cursor until you move the pointer again. If you can log in by providing the password, that may refresh the mouse pointer.

If that doesn't work, and you have a blinking vertical line in the password field, pressing the 'esc' key should return the login window to the choice of users, and should get the computer to try to switch from the text pointer to the arrow pointer.

If you have another computer on the local network, you could try accessing the desktop using Screen Sharing, which does some sleight of hand to get the cursors to match up on both screens. This should also take the display cable out of the equation.

0
MacBook Pro external monitors not working
11
Black screen with cursor instead of login window
4
What Causes rMBP Fan Noise When Connected to Two External Monitors
2
Phantom Displays on Startup
16
Jittery macOS mouse cursor when hovering over links
1
Why does a Macbook pro's internal screen flicker ONLY when it is on a GPU?