I've already approached the Evernote staff and it appears to be a local problem on my Mac (OS X 10.7.5), so I'm taking it to this forum.

The problem in a nutshell: the menu in my Evernote is different from that of the actual release. In addition to that, shortcuts are assigned mysteriously.

Here's the discussion on the Evernote Support site. Screenshot below for a quick view: 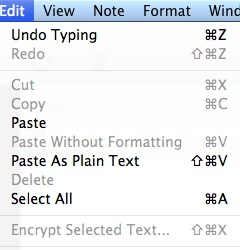 The latest Evernote release only has Paste (cmd-V) and Paste As Plain Text (cmd-shift-V). I don't know where my system is getting an additional menu Paste Without Formatting. What's frustrating is that this problem prevents me from using the Paste function through a keyboard shortcut (tried assigning a global one but it doesn't work).

There is nothing that overrides "Paste" in my Global Application shortcuts. I've even unchecked everything in the other shortcut tabs. 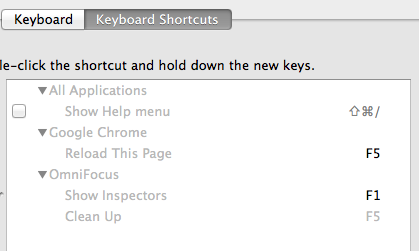 Any idea what's creating this problem, and how I can address it?

Update: It appears to be an account-specific problem. Created a second administrator account, there all the menus were right. Chances are, something in my profile continues to override the menu.

Final Update: The solution should have been fairly simple: assign a new shortcut to the ghost menu item, Paste Without Formatting so that it releases its link to Cmd-V. The problem was that Evernote was reading its shortcuts configuration somewhere else. I even did a full grep of my entire Mac for the phrase above, no result. What fixed the issue? I upgraded my OS to 10.8 and voila! Evernote started accepting new shortcut assignments. That allowed me to restore the original Paste shortcut.

Thanks to everyone who helped out on this problem.

I can replicate this if I set the Paste Without Formatting Menu item to have an hotkey using the system Preferences 'keyboard shortcuts'. 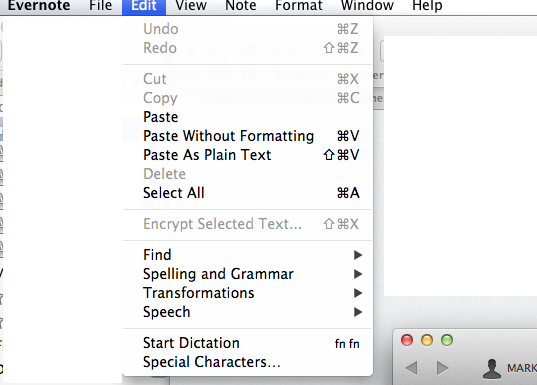 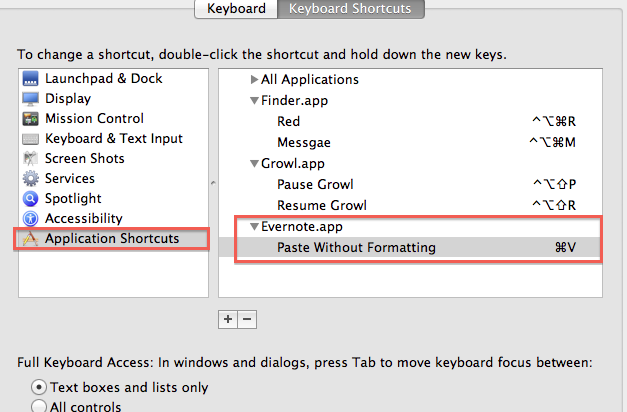 I set the shortcut in 'Application Shortcuts' and the chose Evernote.app rather than All Applications.

Removing the Setting will put things back to normal.

Since the OP. Confirms they once did set a global hotkey and since removed it. But the menu shortcut persist.

I re-did my global hotkey and then deleted the reference from the com.apple.universalaccess.plist file.

This is what the OP. seem to have.

My simple fix for this was.

Re do the global shortcuts for "Paste Without Formatting" in the System preferences global hotkeys. Giving it a new shortcut. Check to see if Evernote picked it up, which it did.

And then deleting it in the System preferences.

This removed it from Evernote.

Not the answer you're looking for? Browse other questions tagged mac .