Remove unnecessary backups from TimeMachine to get space

I know that oldest backups are removed automatically when there is no space for new ones on TimeMachine. I use TimeCapsule also for sharing files on WiFi, so I’d like to free some space by removing of unnecessary backups:

I use this article to help me in deleting files from Time Machine:

It talks about removing all the backups of a single file, maybe it's not what you're looking for, but it definitely could resolve the first issues (Lightroom previews). In practice, it's easier to delete all backups of one file or all files in one backup than it is to go in and remove only one file from one backup.

Here's a brief summary of that article:

You can simply enter Time Machine and select folders, apps, and files and select to delete all backup copies of that item. The command line tmutil compare also gives exhaustive detail of what changed between backup intervals if you don't mind using the terminal and a UNIX shell. Even without shell tools, you can micromanage storage from the Time Machine GUI as follows - quoting Apple's article on Mac Basics: Time Machine:

You can also enter the Time Machine restore interface and find files that can be removed from the backup drive itself to conserve space. To do this, select the file(s) and from the Action pop-up menu (gear icon) in the Time Machine Finder window choose "Delete All Backups of...". Be sure to only delete files you are sure you won't need or want to restore later.

Next, you can use a tool like BackupLoupe to analyze your Time Machine backups to identify how much space each interval used, how much space your average backup takes, how long it will be to fill the drive at the current rate, etc… 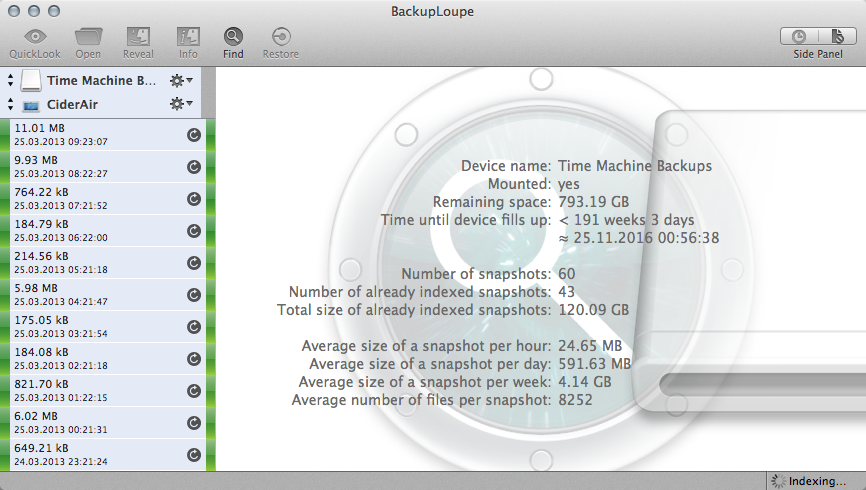 With that level of detail, you can curate your storage needs as little or with as much detail as the situation requires. This tool has helped me figure out problematic backup drives, Macs with filesystem corruption (when each backup is larger than it should, etc…) Once you have visibility on what's being stored, you can delete folders, entire snapshots and configure your backup exclusion lists to be in harmony with your available storage and backup needs.

If you want to delete a backup from a certain date, there is a solution for that. I saw it from this screencast:

I wrote a bash script to delete all the backups but the latest since the ones posted elsewhere didn't work for me. I know you didn't want to specifically do that, but it can be modified to keep more backups (see below). Please not that this does not apply to deleting specific folders or files from backups. This script assumes that you have it on a local hard disk (an external disk, most likely). I had to write my own because the backups are not associated with this computer, so tmutil listbackups doesn't work, and that's what other scripts depended on.

First, run this script to see a list of the backups the script will delete:

To delete all of the backups except the latest, run this script:

I know it could be made fancier by defining variables and stuff, but to be honest, I'm not that well-versed in shell scripts. I just know the other super-complicated ones didn't work, but this one did for me, so here it is for posterity.

I've written a shell script that lets you optionally specify the number of days to keep: all the backups older than the specified number of days (from now) are deleted.

You can check it out on its GitHub repository.

What's wrong with Entering Time Machine, browsing to the oldest backup of the entire drive, right clicking, and selecting Delete Folder. Works for me.

Run this single command in Terminal to delete all Time Machine backups except for the latest:

You can list all your backups using the following command:

The you delete some some backups from the list e.g.:

It will report the size of each backup deleted and total if deleting more than one at a time. Once you have deleted sufficient backups you may find that the actual backup image file on your backupdrive has not shrunk in size, in which case you need to perform the following step e.g.:

If this command fails it may be because your machine is not plugged into the power or you may need to mount the backup image file (just double click on it in the Finder) and eject it again before attempting the compact command.

Not the answer you're looking for? Browse other questions tagged time-machine backup disk-space .