Can not select Airplay Device in OSX

When I click on my Airplay speaker in Sound settings, it jumps back. I have to restart my Mac in order to fix this problem. 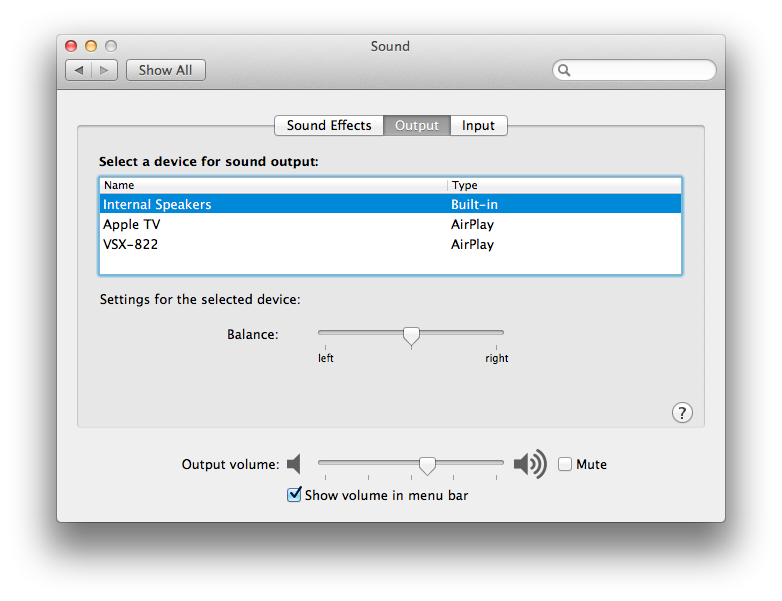 How can I fix this issue without restarting my Mac?

There is command line solution that I've found in Mac Rumors

Which can assigned to an alias:

Then this command fixes the issue:

What you need to do is to restart the coreaudio deamon (coreaudiod). Open up the terminal and run sudo killall coreaudiod. As simple as that.

Then if you're having a difficult time memorizing the above, you can add the following line to ~/.bash_profile

From now on you can just use the alias fixairplay.

Inspired from Mohsen, but simplified by using pgrep.

pgrep's reason for existence is to avoid parsing ps output and is much safer to use when being sent to kill, IMHO cause you are less likely to grab the wrong process info.

I've had the same behavior with HDMI, as well. I.e. For some reason which I have yet to identify, my mac mini (running Mavericks) will switch to using the internal speakers, and any attempt to switch back to HDMI doesn't just bounces back to internal speakers.

Killing coreaudio (which will then restart itself) fixes the HDMI issue as well. @0sh and @jl-peyret have the simplest commands, which can be entered in the terminal:

For people who like to shy away from the terminal, you can also quit the coreaudiod process from the Activity Monitor.

There are some other recommendations, if this doesn't fix things, in this article, though some of them are a bit extreme.

Not the answer you're looking for? Browse other questions tagged airplay .

3
Can I use Airplay without Apple TV or Airport