I have a 15' MBP retina (which has HDMI and Thunderbolt interfaces for connecting to external displays).

I was planning to buy this 27' Crossover monitor (one of those Korean displays that have popular lately). I was planning to use it through a DVI-D to HDMI connector like the ones found here and here.

However, the monitor seller's listing on the page says:

I have read that HDMI and DVI video signals are identical and they only differ in the physical connectors.

If so, can I assume that my planned setup will indeed work with my MBP retina? If not, is there a workaround?

The problem with the high resolution is that the monitor uses a dual-link DVI-cable as it is needed to provide such a high resolution. The Dual-link cable is not a normal DVI-cable and therefore will not work as expected with a normal adapter. The adapter you have linked should suffice thou. But beware that the ad says no adapters and no Macbook, this could be a warning towards people trying to hook up a "HDMI to single-link DVI"/similar or to owners of an old Macbook. We can't know that from the information given from the ad and you should consider contacting the seller.

It can work(you can even say it should work), but looking at this thread: https://discussions.apple.com/thread/4036890?start=0&tstart=0 it's not guaranteed that it'll work.

If you are worried about compatibility, and ordering from eBay with international shipping, then why not cut out the fear and by the same monitor from your local Monoprice (or at least get one shipped from the US), who have recently begun rebranding these items, and shipping them with a decent dead pixel warranty for $390.60: 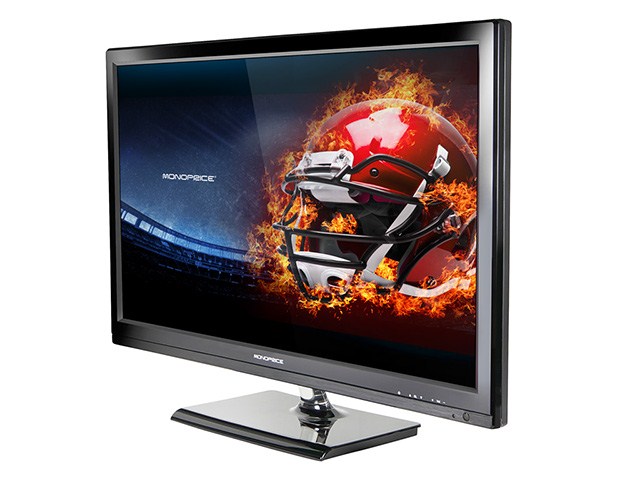 If you're a serious gamer or professional graphic artist, you need a seriously good monitor and you won't find much better than this 27" IPS LED CrystalPro Monitor from Monoprice!

The heart of this monitor is the beautiful IPS (In-Plane Switching) LED panel made by LG in Korea. This is the same panel that is used in the 27" Apple Cinema Displays, which are famous for their stunning color reproduction and ultra-wide viewing angle. The IPS technology in this monitor helps produce this color and viewing angle, as well as increasing response time to 6 milliseconds, which is a critical factor for gaming.

This monitor is designed for the high end. It only supports Dual Link Digital DVI-D input, but it produces a tight 2560x1440 resolution. The IPS technology helps produce a 178° viewing angle in both the horizonal and vertical planes, which makes this an ideal monitor for an Eyefinity setup.

This monitor measures about 25.5" x 16" x 2.3" and weighs only about 14.3 lbs. It draws 65 watts of power during operation and only 1 watt in standby. The included stand raises the monitor off the desk and allows it to be tilted.

The monitor uses an external AC adapter, which keeps the internal electronics away from the heat of an AC power conversion process. The AC adapter can be used with any AC power source from 90 ~ 265 VAC at 50/60 Hz, making it appropriate for use in both US and non-US markets. It has a 100x100 VESA mounting pattern and can therefore be attached to almost any wall or desk mount.

As you've come to expect from Monoprice, we stand behind our products and offer a full 1 year warranty, which is at least 3-4 times what is offered by other monitor manufacturers. Additionally, we are so confident of the quality of these displays that we are guaranteeing these monitor will have less than 5 dead pixels. If you can count 5 dead pixels anywhere on the screen, we'll give you a new one. By comparison, the industry standard, even for industry leaders like Apple and LG, is 10 dead pixels or even more.

Check the customer reviews section to see people claiming to have hooked it up to MBPs etc, and even suggesting which adapter you need - you can get these from Monoprice at the same time, without paying $99 too.

The critical specification in that linked listing is the "Dual Link" portion of the connector and not the DVI-D shape of the connector (although that of course is also needed on the Mac end of things).

So, if you consider a $99 adapter not part of the MacBook Pro, the answer would be no - you can't drive that monitor, but the ad does say MacBook isn't compatible and since Apple discontinued the MacBook you might not even care that some MacBook don't have mini DisplayPort (mini DP).

Apple has a good, no questions asked (14 day) return policy and this eBay auction includes buyer protection, so I would say you'd be covered in the outside chance there is actually some other problem using that display with a dual link compatible adapter and a MacBook or MacBook Air or MacBook Pro with mini DP. All the newer Thunderbolt Macs will also work with this Apple adapter (at least as of March 2013).

Those cheap adapters probably won't work due to the dual link nature of the signal needed for a display that's larger than a normal (a.k.a Single-Link) DVI as opposed to Dual-Link DVI. You could try them if you didn't mind wasting time on returning a cheap adapter or losing that money and eating the adapter purchase. I'd be quite confident Apple's adapter would provide full Dual-Link DVI and if it didn't I'd be prepared to ask for a refund from eBay and Apple on the adapters. Unless you can't test things within 14 days of receipt, you should be covered if it works and if it doesn't work.

It should work with the right adapter, though.

I know this is an old post, but I stumbled on it and thought I would put in my two cents.

I own 4 Yamakasi 301 Sparta monitors. Very similar to the one in the question. They are 30" 2560x1600 displays. They do not have an ad board. I use them for my home office. I have a GTX 770 and a GTX 750 driving the video signal. I have only been able to get them to work using Dual Link DVI. I have tried all manner of converter to try and connect them via display port and via hdmi and have never been successful.

I also have a 13" macbook pro with the 2560x1600 display. It has 2x mini display port and HDMI. I have also tried to connect the monitors to my macbook pro and have never been succesful. I did on one occasion get the macbook pro to actually recognize the monitor, but was only able to get the resolution up to 1280x800.

Personally, I would recommend not getting monitors with no ad board unless you are going to have them connected to a desktop with a dedicated video card 100% of the time. And it's better if you keep your computer running most of the time. They have caused some headaches. Every now and then I have to unplug the video and power cables, disable and re enable my video cards, and then plug them back in to get my computer to recognize them. This happens after driver updates or sometimes when my computer restarts. It's not a huge deal because it doesn't happen often, but it's still a pain having to crawl under my desk and try and disconnect the cables. I bought them to save money, but in retrospect, I wish I would have just bought monitors that had an ad board that were more flexible.

Another thing to note, which may or may not apply to all monitors with no ad board, but may be worth noting. I have burned through 3 power supplies. Not sure if this is just the particular model I have, but the power supplies that came with the monitors are I believe 140 watts? They get very hot, and 3 times now have gotten so hot that components in the power supply actually came soldered from the board and fried the power supply. In one case dripping capacitor fluid all over my carpet. This has happened over the course of 2 years, and the replacement power supplies aren't very expensive, but they haven't always been easy to find. The ad board free monitors all seem to be fairly cheap from what I've seen, which is fine because that's the reason I purchased them in the first place, but it's important to know what you're getting yourself into.

Hope this helps someone.

Not the answer you're looking for? Browse other questions tagged macbook-pro hdmi dvi .

0
Can I connect an iPad to a monitor with with an Apple Digital AV Adapter converted to DVI?
0
Does the Mini DisplayPort to DVI Adapter work with 2048x1152 resolution?
5
MacBook Pro with retina display external monitor connections
13
What causes the retina Macbook Pro HDMI-DVI output to cut out on occasion?
5
Considerations when connecting an 11" 2011 MBA and 13" 2012 MBP to a 2560x1440 Dual-link DVI monitor
2
Macbook pro latest retina: Output to monitor with VGA
1
Flickering external monitor w/ MBP retina 13"