Mac Pro 2008 running but no video out, is it a failing graphics card?

I am running a Mac Pro 2008 as of the last week I have been shutting down the machine instead of sleeping it due to the 10.8.2 sleep bug that had been floating around. Today I went to start it and no video period, and the USB / the system appeared to be unresponsive wired mouse and keyboard and the usb hub had no sign of power. I have tried 2 different displays connected to each of the different DVI ports. The Mac starts with a Chime onetime it did two. The display never turns on or gray, just no signal.

After the resets the machine appears to be not crashing, normal hard drive boot up activity, start up chime, and the caps lock light is able to turn off and on, was not able to verify system is in fact booting OS X though, I think it is, will verify later.

Has my graphics card failed? What else can I do to try and get the video back?

When I went to verify if the system was running, it booted up normally everything working fine. The Mac Pro had been left unplugged from Friday 5pm til about 6PM on Sunday.

Just restarted the Mac Pro and it looks like the Graphics card is back to the same conditions as talked about earlier, although this time I was able to verify that the Mac Pro is still running by remotely logging in. As shown in the screen capture below, the "About This Mac More Info..." shows a missing graphics card name as well as a complete lack of Info with the the Graphics/Displays section of the "System Information" Application. 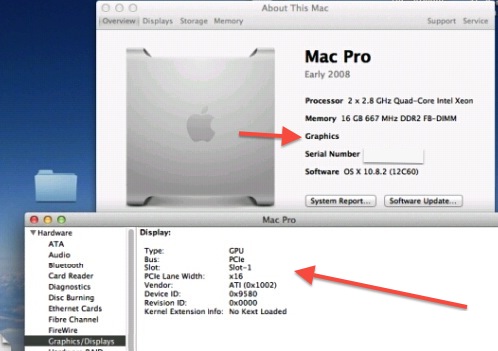 The good news is these cards can be gotten pretty cheap online nowadays, certainly much cheaper than replacing an entire logic board.

It seems that there have been problems with these cards and Apple is still fixing them. I found this article about the ATI 2600 (http://www.itproportal.com/2011/02/21/apple-extends-warranty-mac-pro-video-cards/) which stays that Apple will replace the cards if they are a part of a bad batch they've identified. I hope that helps.

Not the answer you're looking for? Browse other questions tagged macos mac-pro gpu .