Gaming on the rMBP under Windows 7 is a very good experience but I have noticed that unless I elevate the chassis there is a tendency for the automatically regulated fan speed to fail to engage a rising computational load fast enough to keep the CPU under thermal shutdown temperature (Tj max) and freeze the machine.

This is somewhat inconvenient of course, as it means the CPU has reached a temperature that it should never reach, and also requires a reboot.

I know that the fans are capable of running higher than the highest they have been recorded to run which is in the neighborhood of 4900 RPM, they should be capable of going to 6000 RPM, which, even though it would be noisy would be keeping the CPU cooler, which is a good thing in my book.

Here's a screen capture to illustrate... 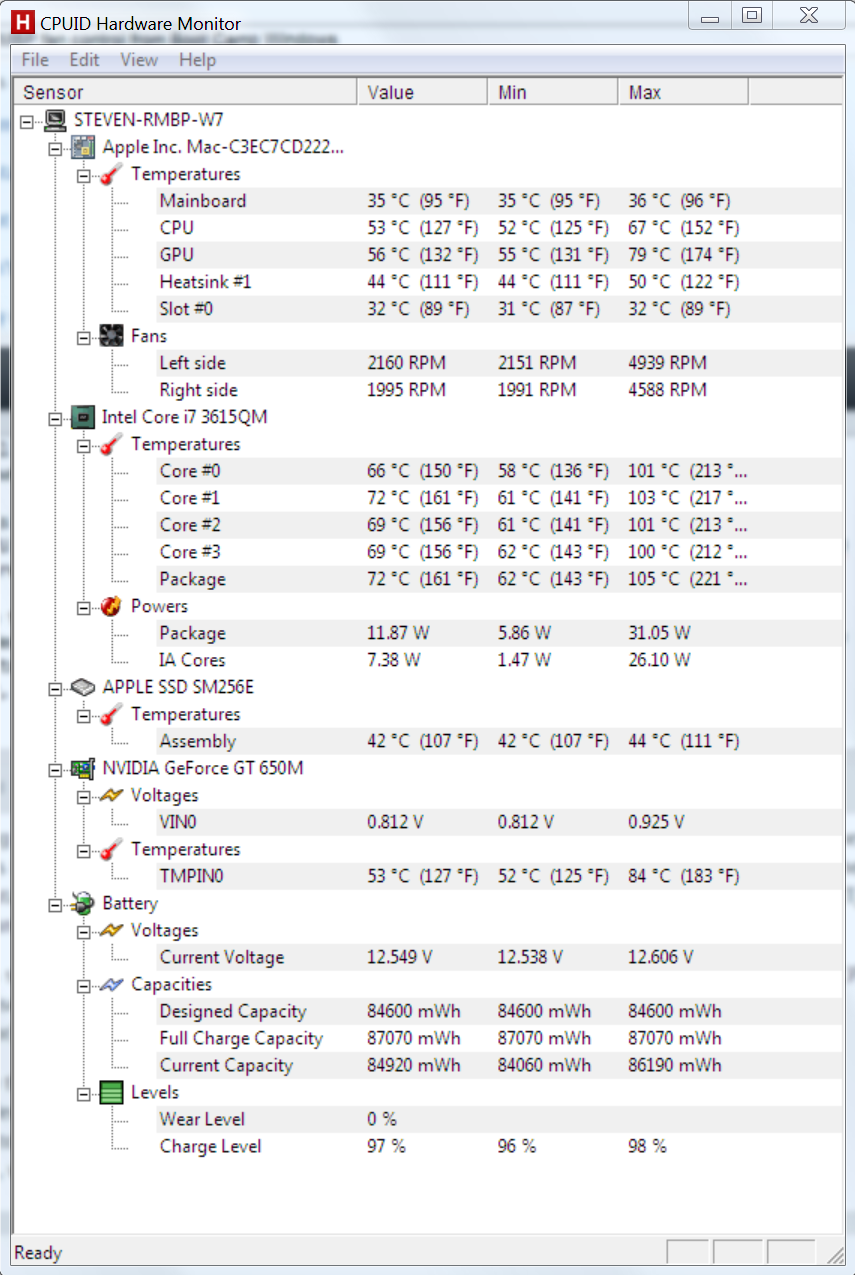 So I hope this makes it clear that Apple's fan speed scaling is a bit on the conservative side when the temperatures are high.

From what I can tell, once you get the machine nice and toasty and the load "stabilizes" it will generally be in a state of equilibrium where the CPU core temperatures hover in the high 80's and 90 degrees C, making occasional excursions above 100 degrees C. So long as the 105 degree Tj Max point is not passed the computer keeps up with whatever game you're playing just fine.

My understanding is that under OS X I can use the smcFanControl app to manually specify the fan RPMs, but I have not been able to find a similar way to control or fix the fan speed once I am booted into Windows. When I did this sort of experimenting on my Macbook Air there seemed to be a method which involved setting the desired setting in smcFanControl in OS X and then sometimes rebooting into windows would have the setting stick. This would basically get the job done if it works on the rMBP as well, but I'd prefer something friendlier.

Are there any fan control applications for Windows that will recognize and allow control of the Macbook Pro fans?

I wonder why noone mentioned wonderful and free Macs Fan Control app that works flawlessly on Windows. All mac hardware support is declared, OS X version is also available.

You need to use an external application to control fan speed in an smart way. "Lubbo's MacBook Pro Fan Control" is the best option to use:

Don't forget, in order to have smart control on fans speed, just change the value of "CPU Key" to "TC0F". Then restart the application.

Place a shortcut of this application on your Windows startup and that's all!

Your Mac will stay cool and keep running even under heavy loads.

So I went with the lubbo fancontrol and changed the config option as suggested above.

One thing you can do regardless of an extra fan controller is drop the CPU power.

Then in the Power Options popup window, I went to: Processor power management > Maximum processor state, and set my On battery and Plugged in percentages to 90%.

Not the answer you're looking for? Browse other questions tagged bootcamp macbook-pro cooling .